If the phantom caps are sized appropriately for for good Z wrt mic source impedance is the 1/F noise audibly problematic or more of a measurement artifact?

IIRC the old mackie preamps often undersized the gain cap so LF noise floor appeared better than it was, because max gain actually dropped off at LF.
-----
These days I'm thinking of floating the A/D convertor up to phantom voltage and just passing the digital optically.

If the phantom caps are sized appropriately for for good Z wrt mic source impedance is the 1/F noise audibly problematic or more of a measurement artifact?

I think if they are sized correctly it's more of a measurement artifact.
When Cphantom is <22uF I think it may become significant. There's always this temptation to make Rbias large and Cphantom <=10uF in order to use film caps.
I found that when Cphantom was >100uF stored charge becomes really hard to manage.
So there's a very limited range.
https://ka-electronics.com

I've returned to this project.

A couple of months ago I ripped the whole DC-coupled preamp out by the roots to rebuild the prototype and make some improvements based on what I've learned since 2007.

My first area for improvement is the differential offset correction servo.

There are two reasons to have a differential servo:
1) It eliminates a Cgain cap.
2) It's required because some mics, when DC-coupled to a preamp, produce offsets due to unequal current draw between legs.

The original "differential" servo was based on work done in the original Phantom Menace and could use improvement due to the DC precision required of the servo op amp.
Since "Menace" was published, an improved servo technique has been developed and discussed here: viewtopic.php?f=6&t=256

In the original DC-coupled design with a single-ended servo - which injected correction into only one input - there was a significant conversion of differential correction into common mode.
A significant amount of the correction current was wasted.
A fully differential servo does not create a common mode component and permits, with AC-coupled preamps, the use of T-bias which is discussed here: viewtopic.php?f=6&t=191

My experiments yesterday - which combine what we've learned in the above threads and more - benefit not only a DC-coupled mic preamp input but also AC-coupled topologies.

I've been working on an "improved" differential offset servo for the THAT1510 (and INA217) DC-coupled preamp that provides a differential output.

I'll post schematics showing how this is glued onto the preamp soon.
This version was tested and debugged without floating power supplies, so the ground connections will ultimately float with Vcm once it's married to the DC-coupled preamp.
(I wanted to get the servo going without having to deal with the 48 and 72V supplies.)

The servo input is connected to the THAT1510/INA217 output. The servo outputs, which are complimentary, inject current back into the inputs.
Note that the time constant is very long to preserve low frequency response at the preamp's maximum 60 dB gain. With the values shown, the 20 Hz response is -2 dB at 60 dB gain. At lower gains the - 3dB point is <<10 Hz.
(These time constants may not be optimum with preamp's that have input coupling capacitors.) 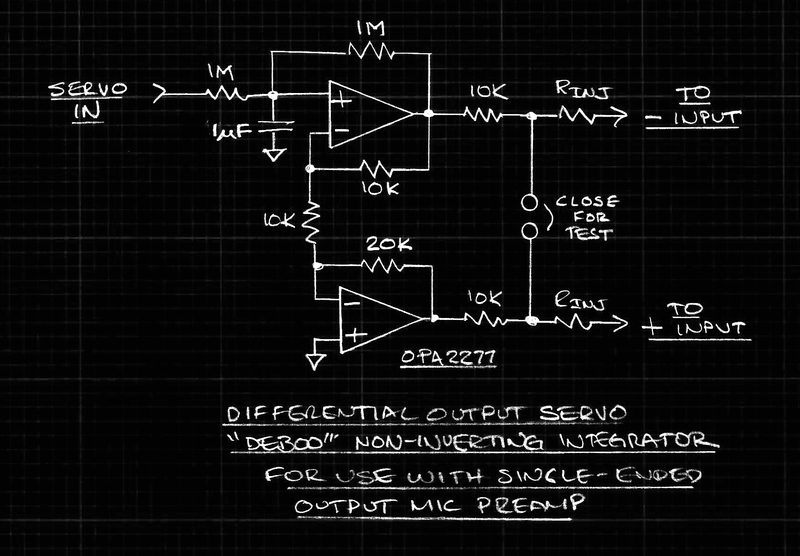 A few observations:
This has a passive RC network at the input. We found that to be important with limited BW DC-accurate op amps. (JR) (See: viewtopic.php?f=6&t=419)
A "Deboo" non-inverting integrator (aka Howland Integrator) was used to provide a passive pole at the input and eliminate a capacitor.

The input resistor and positive feedback resistor are really large considering the 1 nA maximum bias current of the OPA2277. I wanted to keep the integrator capacitor film. With 1M the 1 mV or so isn't a deal-breaker.
The op amps' resistors should be 1%.
A small Cfb around the top op amp 10K from output to inverting input might be a good idea though I didn't see any stability issues with the relatively slow OPA2272.
Note how the inverting amplifier gets it's input. This eliminates a resistor.
A jumper is provided for test to break the servo feedback loop returning into the inputs. This is used to set the THAT1510/INA217 low gain offset, not shown.

I don't know why yet, but you really need to offset the THAT1510/INA217 this way. I've tried both and this offset trim works no matter which servo you use: http://www.ka-electronics.com/Images/jp ... ematic.jpg
The aforementioned circuit has lousy LF response at gain though. The input R and Cfb should be much, much larger.

With the "new and improved" improved servo, and low-gain Vos trimmed at the THAT1510/INA217 pin 5 connection, switching is relatively click-less.
There's no differential to common mode conversion of correction due to differential resistance.
T-bias can be used.
The servo correction range is doubled.
https://ka-electronics.com

I like the real pole in it's input, not so sure about the positive feedback but I need to re-read that Deboo thread...

Douglas Self explains the 1C integrator this way: 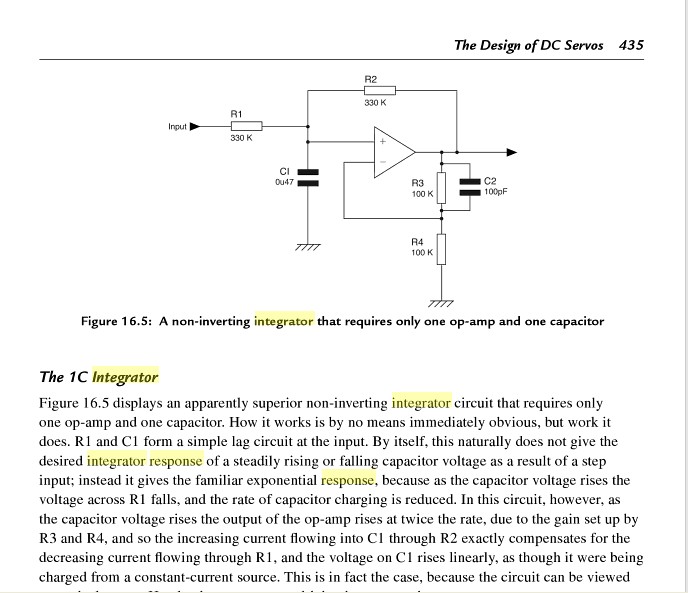 I originally tried the conventional "2C" "differential" integrator, and the above 1C works identical except for the corner frequency not being the same for a given value of C.
It appears to shift up an octave I suppose because the Thevenin equivalent is halved due to 1M||1M in the 1C "Deboo" vs. 1M for the 2C integrator.
I doubled the C value to keep the resistor values from getting too big for an offset-compensated bipolar op amp.

I also made sure that with very high level, high frequency inputs the 1C integrator didn't begin to have a rising characteristic.
It doesn't. The input appears to really be passive despite the positive feedback.
With a 10V p-p input I began to see a slight rise at 500 kHz (-66dB) and I'm pretty sure that was capacitive leakage on the protoboard, not the 1C integrator.
At any high audio frequency it was unmeasurable.
https://ka-electronics.com

Thanks... yup that splains it, clever opamp tricks.

So that mimics the one pole feedback cap integrator, but with a real passive pole (a good thing IMO).

Next question is merit of simple integrator response vs RC response for a servo. An RC limits to the input voltage at DC after sufficient time constants, the integrator limits to a fixed slope increasing or decreasing forever for a DC input. Operating inside an overall negative feedback loop with voltage gain this may be six of one, half dozen another.

So that mimics the one pole feedback cap integrator, but with a real passive pole (a good thing IMO).

For our readers here's a "2C" "differential" servo. Though it uses (and requires) two capacitors it still has a single-pole response. 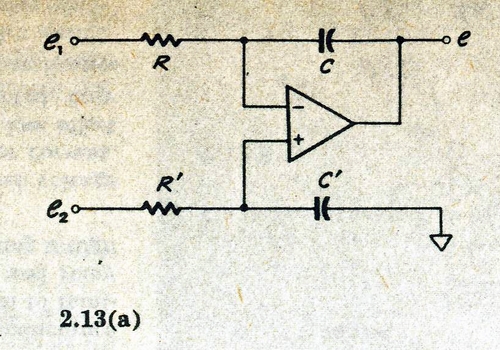 Besides having two film caps, the above requires large-value resistors in each input leg.
The non-inverting input has a real passive pole at the input.
This servo worked just as well as the 1C but requires two capacitors.
https://ka-electronics.com

I have been repeatedly told by a lot of people that an input capacitorless phantom-capable "active" mic preamp cannot be done.

I'm here to tell all of them that it has been done. Twice already. 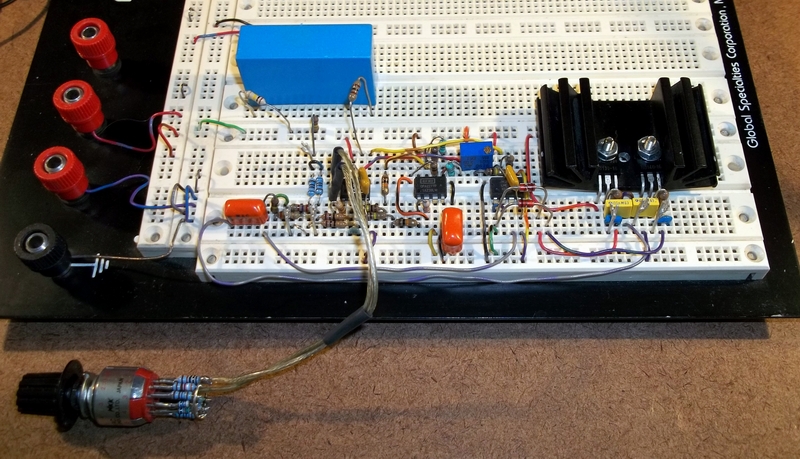 I promised to re-build the prototype and make a few improvements.
Here it is.
It works, I've used it with real microphones, and it doesn't blow up.
I decided to take a pic of it while I clean up the bench.
I don't like having a messy bench with almost 100V floating around. (The supplies are +72, +48 and -20.)

One of the first comments I always get is "Well, some microphones pull unequal current out of each leg. You'll be amplifying all that offset. XYZ tried that and gave up."
Excuse me, but isn't that what servos are for?
The differential servo is capable of correcting - as it's currently built - about 100 uA/leg or 200 uA of total error. It can easily be made to provide more correction current.
The common mode servo keeps things from blowing up by flying the supply rails based on the microphone's DC quiescent point.

It's particularly fun to switch phantom on and off: The recovery time with an actual microphone is about 1 sec from off to useable, monitorable, audio.
Shorting legs to ground to create phantom faults is also a thrill.

Microphones with transformer outputs will typically equalize the offset due to the low DC source resistance.
Microphones with direct-coupled outputs e.g. emitter followers will also have fairly low voltage offset errors.
Microphones with capacitively-coupled outputs current errors will usually be based on resistor tolerance.
The only microphone I've found that pulls all it's current out of one leg - and doesn't meet any standard - is the unbalanced Behringer ECM8000 measurement microphone. This preamp is not for it.

Pardon my temporary use of carbon film resistors while I tweak values.

I'll draw up schematics after I clean up the bench and play some more.
https://ka-electronics.com

Surely nobody "here" told you it can't be done...

This is still unproved until it is tested by the unwashed in the marketplace, in numbers. I wouldn't underestimate the ability of the market to come up with strange black boxes loading down the input phantom supply. i think one company powers a DSP from that input, some just pretty LEDs. It's probably Ok to not support the worst offenders, of good phantom power behavior. In a console one could add a channel or two of old school conventional inputs, JIC.

In practice you probably don't need the full 72V rail... a real phantom mic will draw down the input, and nominal AC 0V to below 48V. If it doesn't then it doesn't really need to be up there in the first place. I guess it's not worth the trouble to scrimp for only a few volts.

When do you start production... ?

PS Don't tell the customers that there is a cap in the servo. Let me know if you want me to design a microprocessor based servo (no caps baby).
Don't only half-ass tune your drums. Visit https://circularscience.com to hear what properly "cleared" drums sound like.
Top
Locked
213 posts