Damn... its always something... I am not seriously considering a new design using these, just going on a little mental vacation... I still don't quite see why there was a 120v version (perhaps because they could)?

Even the designers I know still doing consoles are mostly using preamp ICs. Peavey may still be using discrete devices for a while longer (I don't know), but they use enough volume that they will switch whenever the life time buy goes out, while these parts will kick around the internet available in small quantity for years.

My original thought that led to this was that high voltage capability and low noise in the input transistors were almost mutually exclusive. Flying the rails around allowed less critical HV parts to be used.

Hopefully someone will pickup production of the 2SA1084 and 2SA1085 like Central, Linear Systems, ON, Fairchild etc.

I think the exercise using them might be worth it John. Maybe build one with some MPSA92s to provide a proof-of-concept?
https://ka-electronics.com

OK, here's some more part numbers that look interesting 2SA984/2SC2274 500ma parts with pretty high beta,,, but no published NF curves or even who makes these?

The good news is i don't need to find a solution, but these parts if they don't suck also have decent breakdown voltage. They spec lower capacitance than old school low noise devices which makes me a little suspicious about Rbb as that suggests a small geometry die, but it is a 500mA part and beta is specified at 50mA so it could be higher beta at lower current. ... or not.

Those look to be discontinued Sanyo. I keep seeing more openings for Central Semi and Linear Systems. These HV/LN parts - and discretes in general - are going EOL fast.
https://ka-electronics.com

What a buzz kill... Since I'll never build this anyhow, I'll just stick with cascoding my 737s that i have a stash of back in my lab.

Could the MPSA92 be selected for low noise? They're common and in production.
https://ka-electronics.com

They probably wouldn't be any worse than the devices Paul Buff selected to use in his trans amps and VCAs. Back in those days we selected them because of poorly controlled process contamination that caused noise. Probably not a big issue these days. I suspect the Rbb will be OK in a 500mA device, but the beta looks a little low for serious low noise front ends, so input noise current could be higher. Not bad, but not as good.

Safe design approach is to throw cascode at it so any low noise device can drop in the very front end.

The first part of the paper focuses on 0.22 uF values at a 1 kHz test frequency that might be used in a high pass network. He found:


Comparisons of signal voltage across the capacitor with THD levels suggested that there was a more complicated relationship at play. Graphs of apparent power are provided with measurements of THD+N vs. Frequency. It is thought that the relationship between THD and Apparent Power may be more significant than that of voltage alone.

For phantom coupling, his experiments involved 10 uF values into a 1 K Ohm Rbias.

A LF distortion mechanism is revealed particularly with polarized electrolytics. 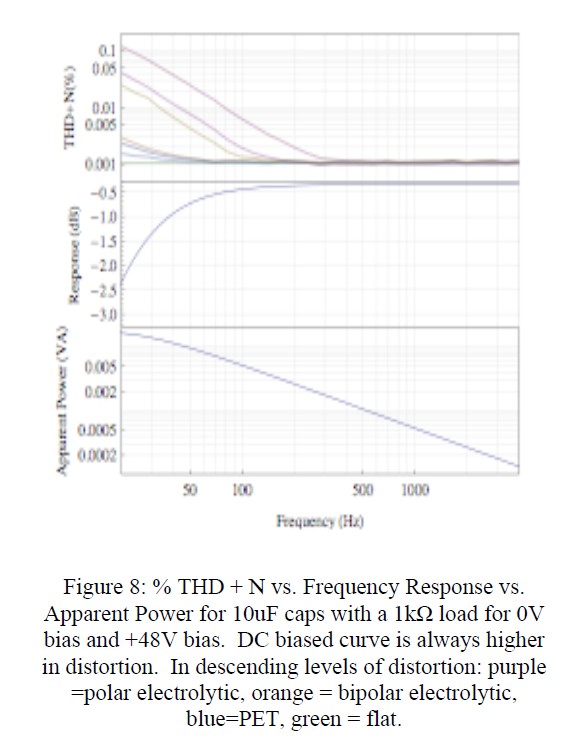 He loses me here briefly:


This range puts a restriction on the type of capacitor that may be used, particularly if cost and size is a factor.

Well, no.
The phantom resistors are on the left side of Cphantom.
What is significant is the bias resistor on the right-hand side.
I think that may have gotten muddled in editing.
The bias resistors (and current noise that requires them to be relatively low) put the restriction on the type and value of capacitor that can be used.
Gaskell chose 1K for his tests so he's at the low end of typical but reasonable.
The differential impedance the capacitors work into is 2K?; the preamp impedance is 2K?||13.6K?.

It also shows that no capacitors are best since thay all introduce some THD either with or without phantom. The green "straight wire" line is the one I want.
https://ka-electronics.com

I am getting a bad feeling about a few things, but to be fair I didn't pay to read the paper.

Technically the phantom blocking caps DO need to be low impedance wrt 200 ohms, but they DO NOT need to drive 2k input termination. There is no reason why circa 2k termination cannot be on the same side of the caps as phantom 6.81k. IIRC Buff used 100k to ground at actual preamp inputs and I vaguely recall some private conversations with him about first order cancellation of input noise current when shunt impedance between + and - inputs was low wrt actual impedance to ground (probably dominated by phantom dropping resistors) so noise from one input shows up in the other input only slightly attenuated, for partial cancellation.
======

So besides perhaps loading the caps more heavily than needed, did they use a suitable variety of different make caps?

I am an official member of the "best caps is no cap" fan club. But the distortion numbers you had up before (from memory around -60 2nd, -70 3rd, doesn't seem very horrible , and what mic is cleaner than that to use a s a reference?

There is no reason why circa 2k termination cannot be on the same side of the caps as phantom 6.81k. IIRC Buff used 100k to ground at actual preamp inputs and I vaguely recall some private conversations with him about first order cancellation of input noise current when shunt impedance between + and - inputs was low wrt actual impedance to ground (probably dominated by phantom dropping resistors) so noise from one input shows up in the other input only slightly attenuated, for partial cancellation.

Well, there is one reason why the 2K should be on the same side as the preamp (right-hand side of Cphantom) and that's 1/f noise. Particularly if your using 100K bias resistors to make C small (film) and improve CMRR at LF. I kept being reminded of that by people who battled 1/f. If the 2K is on the left side of the caps then the caps at LF appear in series with that 2K||source. If you're using 10 uF film caps (5 uF in series) than at 20 Hz the reactance is 1.59K. So you've added 1.59K to the source impedance.

T-bais made the CM impedance the caps worked into higher improving the LF CMRR. It did so without noise penalty since the majority of the current noise summed and appeared in CM.


I am an official member of the "best caps is no cap" fan club.