Where we discuss new analog design ideas for Pro Audio and modern spins on vintage ones.
Post Reply
33 posts

I see a lot of questions here and elsewhere asking about servos for the THAT1510 and THAT1512. This post will discuss an improved servo circuit which has the goals of reducing switching clicks during gain change and eliminating a large value Cgain. An added benefit of this circuit is that output offset is significantly reduced.

Without a large value (3300 uF typ) series capacitor in the Rgain line, the THAT1510 or 1512s worst-case output offset is defined, in millivolts, as (0.25*Gain)+/-5 mV. The +/- 5mV term is essentially the offset of the output differential amplifier and the (0.25*Gain) term the amplified 250 uV input error. Without a Cgain, the DC error at the output can be as high as 255 mV. (Neglecting Ios bias current errors.) In addition, the <=250 uV terminal voltage across Rgain, when amplified, will make pots sound scratchy when rotated or cause stepped gain switches to click. The primary objective is to keep the terminal voltage across Rgain <<10 uV. 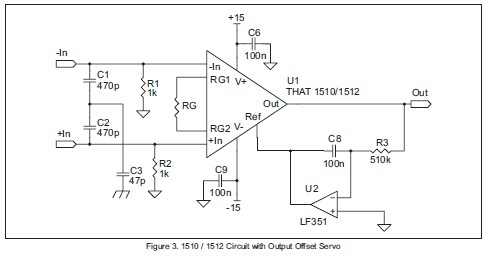 Image Courtesy of THAT Corporation

The circuit shown above "pins" the output baseline to near 0 volts, but does nothing to reduce pot scratch or switch clicking because it does not reduce the terminal voltage across Rgain. This servo works "after-the-fact" by feeding error correction into the Ref pin.

"Phantom Menace," the AES paper published by Hebert and Thomas, shows a servo circuit which senses the error at the Rgain pins and feeds that error back into the input: 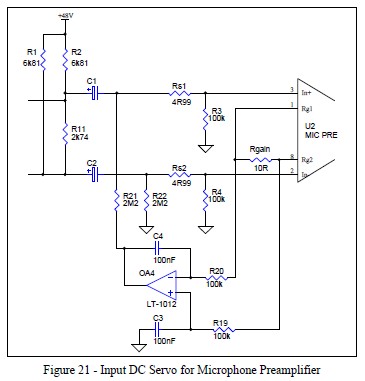 The motivation for the input servo described in "Menace" is to reduce input offset caused by the 100k bias resistors. High value bias resistors, as opposed to the more typical 1k, were used to illustrate the benefits of low-value input capacitors and the reduced stored charge dumped during phantom power faults. 100k values allow, at the expense of current noise, the input capacitors to be made as low as 2 uF. Although it is often cited, I do not recommend this circuit.

The effectiveness of this servo at reducing clicks and pot scratch is rather limited. There are a number of reasons for this:

1) The input voltage offset of the error amplifier must be significantly lower than the offset voltage being corrected. At 60 dB gain, the Rgain terminal voltage should be less than 10 uV to keep clicking low. An expensive LT1012 ($7.70 qty 1) is marginal in this application. An affordable OP07 has almost as much offset as the 1510 or 1512 itself.

2) High value input resistors must be used in the error amplifier to prevent loading the 1510/1512 Rgain nodes. At the required 100k, the servo amp's bias current error (Ibias*Rin) becomes significant.

3) Vos and bias current errors can be trimmed out, but the 0.6 uV/deg C drift (and Ibias drift) of the LT1012 still causes significant errors.

The device measuring the error has to be so much better than the 1510 or 1512 that a servo directly sensing Rgain terminal voltage is not practical. But, what about indirect measurement?

Sensing the error at the output, shown in the first figure, but applying correction to the input, as shown in the second figure, provides numerous advantages. Two significant advantages are 1) reduction in the required precision of the error amplifier/servo and 2) reduction of Rgain terminal voltage in order to reduce clicking and scratching.

At low gains however the 1510s internal output amplifier offset, the "+/- 5 mV" term, works against us. Although clicking at high gain is virtually eliminated, clicking at low gain is quite severe. The servo "sees" offset at Rgain which does not really exist. The key is to make the 1510 DC-accurate at low gains.

Without some means of eliminating the low gain offset error we've only moved the problem to the other "end of the dial." Fortunately for us, the low gain error is fixed and constant. Here's the solution: 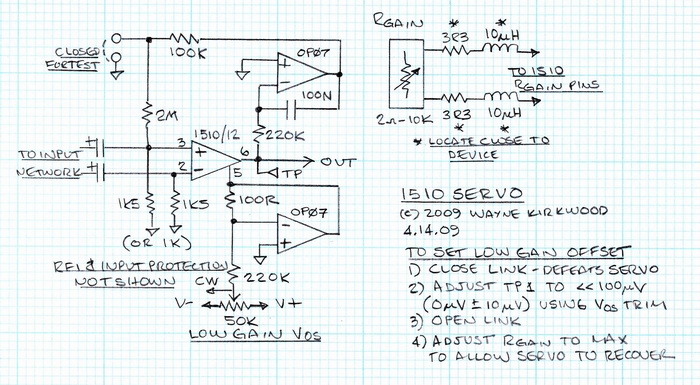 By defeating the servo during test and adjusting the low gain output offset to <10 uV the 1510 is made DC-accurate. The fixed "5 mV" term is trimmed out. With the servo re-connected for operation, the variable "0.25*Gain" error is servo'd. Thus, clicking at all gain ranges is significantly reduced because the Rgain DC terminal voltage is minimized by correction applied to the input.

The test 1510 was fairly typical, having uncorrected output offset of 1.34 mV (at unity gain) and an uncorrected Rgain terminal voltage of ~174 uV. With the servo operational the output was pinned, under steady-state conditions to approximately 100 uV essentially the combined errors of the OP07 servo and low gain Vos adjustment. The low gain offset adjustment range is about +/- 7 mV.

Worst-case clicking occurs during rapid slewing from low gain to high. This is the output rapidly switching from low to high gain (+6 to +60 dB) without low gain Vos adjustment:

This is the output with low gain offset adjustment:

Unless someone is in the habit of rapidly rotating gain controls with reckless abandon it's doubtful that even 15 mV would be produced. For the most part, gain change clicks are buried in the noise floor - and, to hear them - the monitoring level has to be quite high. In the last image you can see about 5 gain steps before the servo recovers. From the middle of rotation to either end, or from top to bottom, clicking is almost inaudible.

In my tests I estimated that the rotary switch was slewing from minimum to maximum gain in about 300-600 ms. I felt like I was abusing the switch and expected springs to come flying out. Rotating a fairly stiff pot that fast proved difficult.

The 10 uH inductors in the Rgain line are not essential but I recommend them. There can be rectification of HF and VHF frequencies above the small-signal bandwidth and at the very low voltages and offsets of this circuit they can also add to clicking. With 10 uH inductors the - 3dB point, at maximum gain, is about 80 kHz. Remember that in any preamp the input lines and Rgain lines should remain tightly balanced and loop areas kept small. I recommend that the inductors and Rstop resistors be as close to the device as possible.

I learned a fair amount about phantom coupling caps doing this exercise. I'll save that for another day...

Hey, nice work Wayne! You do need to spill the beans on your coupling cap experiments too. LOL

No worries about tempurature drift? The switch you characterized is a break-before-make?
Top

The switch I used is indeed break-before-make. Between every gain step there is a brief return to unity gain.

The temperature drift of the THAT1510 isn't characterized in the data sheet. My concern would be with the Vos of the internal output op amp and the OP07 driving the ref pin. Drift in those stages would contribute to low gain clicking. Drift in the 1510 front end is self-corrected by the servo and is at the mercy of the OP07 error amp.

Having run this (off and on) for several weeks I'm not seeing long-term or warm-up drifts. I've done a few thermal experiments with the desk lamp. I don't have an oven to test it with large temperature changes but I'm confident that it is as good, or better as any other option.
https://ka-electronics.com

You already know how I feel about coupling caps (the best cap is no cap).

I need to digest this.. right now I'm a little too scattered.. to wrap my head around this.

I fired up the desk lamp and temperature probe. With the global servo defeated I looked at the offset drift in the 1510 output op amp with it operating at 6 dB gain.

At 69 degrees F the output Vos was a trimmed -0.11 mV. At 129 degrees -1.15 mV. It took about a 34 degree C rise to "undo" the effect of low gain Vos trimming. From my measurements it appeared that the 1510 was responsible for most of the drift. This come as no suprise but far less than I would have thought at about 30 uV/deg C.

With the global servo re-connected the effect was, with very rapid rotation of the gain switch, and increase in click level (low to high gain) from 15 mV p-p to about 30 mV p-p.* Not bad. The way most people would use it, turning the knob more slowly, it was still very quiet. In fact, some people - particularly those wanting to use pots - could eliminate the low gain Vos trim altogether.

*(Edit: This number is highly variable and depends on how long the control was "parked" at minimum gain and how fast the switch is rotated upwards. 30 mV p-p is a long way from the 600 mV p-p posted earlier. Again, operating the switch in the manner it would normally be used in makes a big difference in how well this works. At elevated temperature, maximum clicking seemed to move up the dial a few notches and be less of a problem than with no correction at room temp.)

WIth the global servo connected and the 1510 operating at 60 dB gain, the output Vos did not budge from approximately 90-130 degrees. The output is well-pinned to 0V with the DC metering reading 1/f noise, not offset.

The effect of temperature seems to be the requirement that one slow down rotation rates e.g. going from rotating it so fast you fear damaging the switch to just using it normally.

I encourage anyone curious about this circuit to just build it and see for yourself. As John says: "YMMV."


JR. wrote:You already know how I feel about coupling caps (the best cap is no cap).

Yep, I keep adding reasons to my list. Ironically, sonics is the last item. Noise seems to be at the top. More on that later.
https://ka-electronics.com

Wondering a bit more about the tempco - Did you disable the Vos buffer as well as the servo when you did your temp experiments? How many 1510's samples did you try?
Top

Thanks for checking in. I disabled the global servo but not the Vos buffer. There was no correction.

Although I didn't publish the numbers and only measured it at only a couple of sample points, the Vos buffer (OP07, trim and resistors) didn't appear to be the primary source of drift. Most of it was 1510 output amplifier.

With the minor temperature drift, the closed servo loop issue becomes not one of final offset, but of maximum rate of gain change vs. dynamic offset.

Wayne, did you ever try just using a simple pot to null out the input offset instead of a servo ? Would that be temperature stable & clickless? Of course you need the OPA for the output offset.
Top

I tried that first. Unfortunately, there's too much temperature drift. Dielectric isolation makes great transistors but the insulating "tubs" they sit in insulate thermally as well as electrically. Thus the Vos, tends to have more drift than a monolithic matched pair would typically have.

In addition, RF rectification creates what appears to be DC offsets (I suppose they really are) and the trim has to be constantly changed with gain and environment. I recommend those chokes to anyone making a CFB-type mic preamp whether it uses a 151X or not.

For most applications, the low gain offset trim (that's the one that calibrates out the offset of the diff amp itself) can be removed. That leaves the OP07 wrapped from output to input.

There's a trick that can be done using a differential output servo fed to both inputs. Doing that allows the use of T-bias to reduce the CM matching of caps.
https://ka-electronics.com

Interesting to revisit this old thread... I've got at least one new question... Do they still make chopper stabilized opamps? IIRC they were slow as dirt, but very low offset voltage. Probably too noisy for a mic preamp.