And I've gone to serious lengths to investigate Ib through MM including staring through a measuring microsope and test records.

I was placing a small order with Allied today and decided order some high-performance op amps. I left the AD7XX-family in the cart for later. I also had some of the National LME-series on my wish list.

I'm not going to lose sleep over a few nA in my MM cartridge.

Here's a blast from the past: John's original P10 Popular electronics Article... 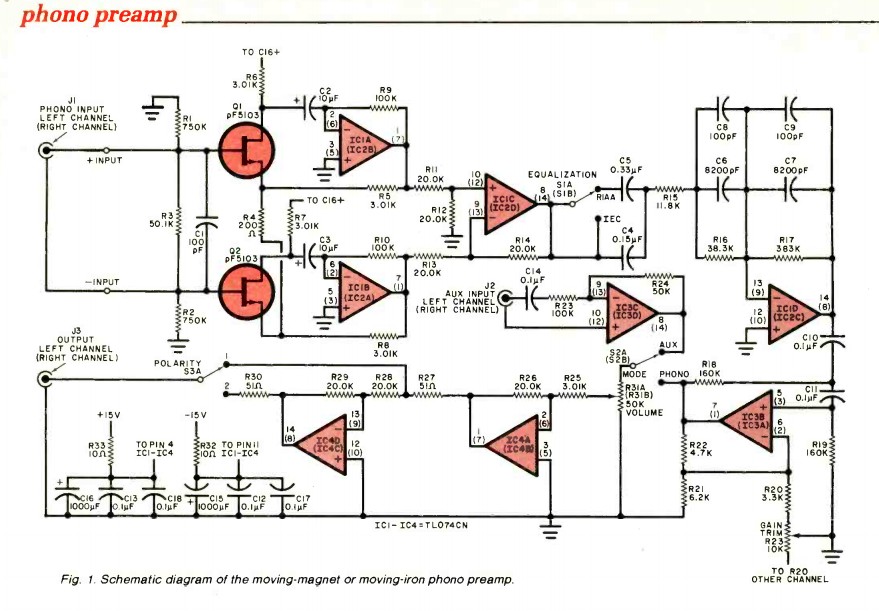 Just curious about its sound, at least compared to other high quality designs.
Top

While in my judgement substituting lower noise JFETs and maybe more modern bi-fet opamps in the p10 could be nice, I superceded my own design with my later P100 see viewtopic.php?f=12&t=151&hilit=p100

The P-10 is still attractive for use as a flat front end for de-clicking or other digital post processing. For a simple RIAA preamp the P100 is a higher effort design, while I expect a very serviceable preamps could be accomplished using modern uber bi-fet op amps in any one of several split designs (where gain is spread between two op amps).

I built a flat-preamp using the LME49860 in an instrumentation amp configuration followed by a 1240 similar in topology to the P10 without FETs and liked it.
IIRC it compared favorably noise-wise to the FET-based P10-inspired flat preamp that I made from a 2SK389V/dual op amp.

The RIAA EQ was applied in software after de-clicking.
https://ka-electronics.com

I've been noodleing around on the bench with the front-end and RIAA EQ monitoring stage for the flat phono transfer preamp.

The P10 EQ stage seems to have excellent RIAA conformity.

Rather than load up the protoboard with 6800pF||1500pF I grabbed some vintage Elpac 8200 pF box films with a 1968 date code.
The 8200 pF caps happened to measure at ~8350 pF each so I used them without padding caps.
The 0.6% accuracy was pure luck.
Since I didn't have 38K3 or 11.8K in stock I used 39K and 12K 1% along with 383K 1%.
Thus, until Mouser and UPS send me some correct values the 318 and 75 uS will be a little off for now.
The 20 Hz and 20 kHz endpoints measured dead-on.
Using an RIAA preamphasis network I already had I couldn't see any meaningful deviation from flat throughout the band.
Though I admit to not putting a frequency counter on the generator and the pre-emphasis network accuracy was not perfect I believe that from a practical standpoint RIAA conformity is going to be about as good as it gets for such a simple circuit.
The 1 kHz gain of the EQ stage measured -2.4 dB.

Though the primary purpose of this project is to facilitate flat recording with RIAA monitoring there are situations where people will want to record with normal RIAA de-emphasis.

One of the things that will speed workflow is level matching the flat (non-EQ'd) peak level to the RIAA de-emphasized peak level so that both hit the workstation without large gain adjustments.
As you might expect the un-equalized playback is very hot, transient, and has a peaky high crest factor waveform.
Not much gain is required: +32 dB seems like a lot.
The RIAA output requires more gain to provide the same peak level.
Based on a limited sample of discs it looks like an additional 10 dB of post-EQ gain is required to bring the overall peak level up to the flat level.
I expect it to vary quite a bit depending on era and genre but the resulting 7-8 dB net gain (10 dB - 2.4 dB) seems to be a good compromise.

Right now there's +26 dB of flat preamp gain and an additional 6 dB in the OutSmarts output stage for 32 dB of flat overall gain.
When placed in RIAA EQ mode the overall 1 kHz gain is about 40 dB.
I suspect that I may want to provide a global gain adjustment.
Since the input stage is a balanced instrumentation amp, varying Rg seems like a good option.

*(I did however experiment with using a servo to provide the "IEC" pole but decided it wasn't worth it.)

BTW: The NJM2214, which is a 5532 with NE5534 noise performance seems to out-perform the LME49720 in a FET-less instrumentation amp phono front-end.
https://ka-electronics.com

If you still need the 1% resistors for the old P-10 RIAA EQ let me know, I probably have a couple hundred in my back lab.

Thanks John. I may take you up on them.

I continue to be amazed how simple the EQ network becomes just by moving the feedback node.
https://ka-electronics.com

mediatechnology wrote:Thanks John. I may take you up on them.

I continue to be amazed how simple the EQ network becomes just by moving the feedback node.

EMAIL or PM me your current snail mail address. I probably have some 8200 pF polystyrenes too, IIRC they were probably 5% tolerance, but sweet caps.

Re: Flat Phono Preamp Based on John's P10

I wanted to share a pic of the flat phono preamp protoboard.

This is the record path of the Flat Phono Transfer Preamp.
It has bipolar input instrumentation amps to provide a fully-balanced MM phono input.
An RIAA EQ de-emphasis network for full-range transfers is also included.
The relay switches between Flat and EQ'd transfers.
The output is also fully-balanced by THAT1646s.

An identical path will be provided for monitoring.
The monitor path also has switchable RIAA de-emphasis to permit non-destructively monitoring the record path during transfers with either flat response or with EQ.
On playback, the monitoring path can be used to monitor the effects of de-clicking both with and without EQ.
This permits de-clicking to be auditioned with RIAA de-emphasis without having to render the file with software EQ applied.
It will also be possible to simultaneously record and monitor two different sources.
The input stage of the monitoring section will have either 0 dB or +32 dB gain set by a jumper so that it may be used for playback or a second turntable input. 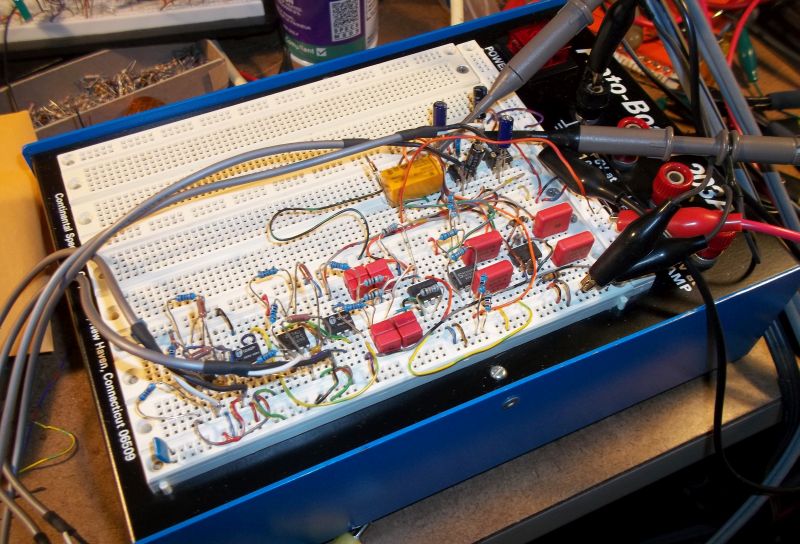 The input stage in the prototype uses NJM2114s as an instrumentation front end followed by a THAT1240 common mode rejection stage.
Without FETS its a copy of John's 1980-era P10.

The cartridge is direct-coupled to the op amp inputs.
Other than optional OutSmarts capacitors there are no electrolytics in the primary signal path.
OutSmarts caps are only really in-circuit when the output is connected unbalanced.
Servos are not used.

I considered using low noise NFETS but noticed during testing that the LSK170 and 2SK389s seemed to have significantly higher 1/f noise but only slightly better noise in the top octaves where cartridge inductance rises.
In the top octaves the FETs were a little quieter: the 100 Hz and 10 Hz 1/f noise was far higher with FETS.
When RIAA EQ is applied the difference is huge in the absence of A-weighting.

The FET advantages of low bias and noise current didn't seem to be worth the added cost and difficulty of sourcing components.
The LSK170/189 and 2SK389/LSK389/LSK489 are not inexpensive.
The BF862 is a fantastic part available for pennies but is available only in SMT.

The RIAA EQ circuit is based on John's excellent P10 design.
What I like about it is:

1) "Passive" 75 us pole at the input. HF gain falls forever.
2) 318 us and 3180 us breakpoints do not interact due to the location where feedback is taken.
3) It is inverting which eliminates CM-induced distortion.
4) The cap values are identical for the 318 and 3180 us breakpoints.
5) The combination of capacitor value and E96 resistor value hits all of the time constants spot-on.