While this may be academic do you have a phase response capability? If the amplitude is right the phase will probably be right.

JR. wrote:While this may be academic do you have a phase response capability? If the amplitude is right the phase will probably be right.

I think I might, but I've never used it in either tool.
Would be fun to plot.

I did do an X-Y on the 'scope with mono generator input and RIAA EQ applied - it was razor sharp.
There was minor spread (phase shift) in the lowest octave because the film coupling caps are 5%.
I'm using 1% 10nF EQ caps so the mid range and up is spot-on.
https://ka-electronics.com

Just got some OPA1612 SMT/DIP adapters from Brown Dog/Cimarron Technology to see how they compare in the flat preamp.

The 1612's use TI's Silicon/Germanium process in an NPN bias-compensated input.
The input voltage noise density is 1.1 nV/sqrtHz with a low 1/f corner.
The current noise is higher than the NJM2114 at 1.7 pA/sqrtHz vs. 0.4 pA/sqrtHz.
The OPA1612 - if it doesn't have the burst noise of the LME-series should be a good SMT replacement for the now discontinued LME49720.
https://ka-electronics.com

I had Brown Dog/Cimarron make me some OPA1612 to DIP adapters to try in the Flat Moving Magnet Preamp board.

I wanted to see how the OPA1612 worked both as a moving magnet preamp as well as a moving coil application in the balanced instrumentation amp configuration here:

The moving magnet performance was not optimal due to the higher current noise of the OPA1612 compared to the NJM2068, NJM2114, NJM5532 and OPA2134.
The results were not a big surprise.

As a moving coil preamp the OPA1612 turns out to be pretty decent. 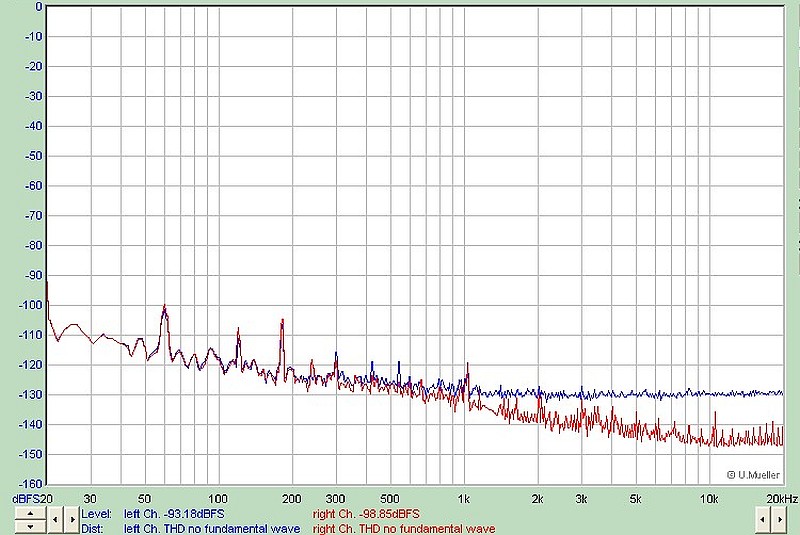 The blue trace is the output of the preamp after the THAT1240 common mode rejection stage.
The red trace is the converter residual noise.

Though not sub-nV pretty decent for an un-assisted op amp.
The OPA1612 has respectable performance in this circuit as a moving coil preamp.
https://ka-electronics.com

I'm finally getting to the "demo" unit I'm going to pass around. I should be able to finish it up tomorrow. The preamp is set up for an MM cart with room to add transformers for an MC.

I did the face plate and wired the switches. I still have to test and calibrate. I decided to ditch the variable level. To maintain optimal headroom and get 7cm/sec to +4dbu you have to take gain after the EQ. This means there will always be gain through the line level section. I thought the variable level would be confusing and not that necessary if there is tons of headroom.

Thanks for posting the pics Paul. Looks very good!

Your build reminds me that I have a couple of the Pico PSU boards I can use.

I wanted to confirm what you wrote about gain-structuring.

For +4 outputs you definitely need gain after the EQ to maintain HF headroom.
The flat preamp has a +27 dBu overload point, but the line receiver on the RIAA EQ board overloads at +21 dBu.
(It could be +27 using a THAT1246 instead of the 1240 but I thought it best not to throw away gain.)

How much gain post-EQ based on 7 cm/s and your MM cart does it take to get +4?
https://ka-electronics.com

mediatechnology wrote:Thanks for posting the pics Paul. Looks very good!
How much gain post-EQ based on 7 cm/s and your MM cart does it take to get +4?

I have a few MM carts. I was using the AT 150MLX to test before. I don't remember how much gain I had. I've settled on adjusting the flat preamp gain to produce -6dbu @1K and adjusting post EQ gain to get to +4dBu. If my addition is right this leaves over 30db of headroom at 1k, 20dB at 10k and 10dB of headroom at 20k. There is not much on a record above 15k so this gain structure makes it very difficult to clip it.

The only thing I don't like is the gain through the EQ. When using a line input the source level would have to be dropped. I suppose I could rig a relay to drop the gain when the EQ is switched to Line. Line won't get used much so I think that's overkill.

It occurred to me that if the 1240 input for the EQ/Monitor board could drive the EQ, the first gain block after 1240 could be moved to before the Record/Phono output so the EQ could be calibrated for unity gain.
Top

When I designed the signal flow for the Phono Transfer System I knew that there were going to be people who wouldn't need the entire feature set. This post shows how to stuff the PC boards for RIAA playback only applications in situations where the Flat Balanced Input Preamp and RIAA EQ board are in the same chassis. If the preamp is going to be remotely located from the EQ board, then the preamp should be built with balanced outputs (IC2 and IC22) and THAT1240s should be installed on the EQ board at IC1 and IC2.

The high-lighted areas on the stuffing diagrams below are the components needed for RIAA playback. 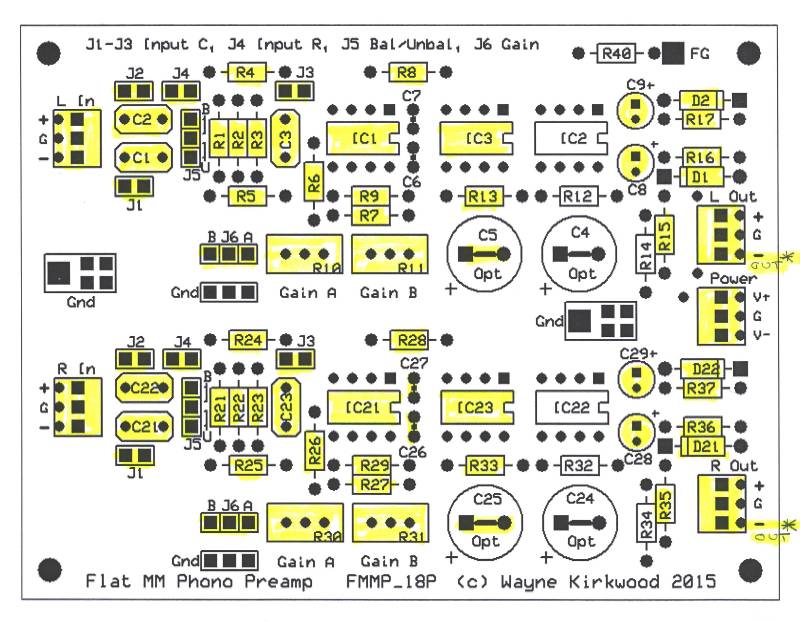 Construction of the Flat Balanced Input Preamp is virtually identical with only a single THAT1240 common mode rejector IC needed per channel.
The inverting output is used to correct a signal inversion on the RIAA EQ monitor board. 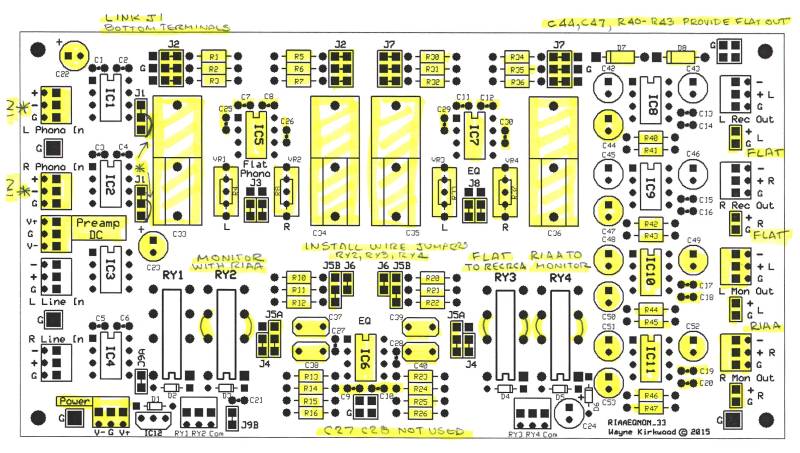 The RIAA EQ board has all of the line receiver ICs, and two line drivers removed.
The "-" input is used to receive signal from the preamp.
No relays or relay 12V regulator IC are required.
In addition to the balanced RIAA EQ output there are auxiallary RCA outputs for both the EQ'd and Flat signals.
https://ka-electronics.com

Here are some tests with the RIAA EQ in. Looks pretty close.