Yeah, you have to ignore the extreme cases.

Both in terms of microphones and the people who use them.

This is exciting to see develop.

Thanks. It's exciting to do. (Again, finally.)

I knew the Earthworks pulled 10 mA (5 mA/leg) and I think it clocks in at one of the all-time highest followed by Shure's large diaphragm line.

I don't know that Earthworks has ever really explained it. They just warn you should use a preamp of impeccable specs and (if you must) high quality modern transformers. If I knew what the reason was, I said 'bah!' and chose to forget after a freakin' Jensen made one cease to function. The experiment in question was an Earthworks into a Sytek (transformerless modern), with a Jensen splitter added, the iso side of the Jensen feeding another Sytek channel. The Earthworks always worked with every transformerless preamp I tried, never with a transformer coupled preamp.
Best,

a freakin' Jensen made one cease to function.

It actually broke it?
Have to wonder if the Earhtworks doesn't like the low DC termination resistance (between tip and ring) of a transformer primary.

For the DC preamp the DC termination resistance is fairly high as it would be in an active preamp.
My target value is going to be 5K? differential.
It can never be more than 13.6K? due to the phantom source resistors.

It worked again once the transformer was removed from the picture. The Jensen is 50 ohm DCR.
Best,

(The Earthworks) worked again once the transformer was removed from the picture. The Jensen is 50 ohm DCR.

It's also a good reason not to worry in the DC-coupled capacitorless topology about mics that don't play by the rules (ECM-8000) or some DSP-based gizmo stealing power from phantom and presumably providing a mic-level DSP-processed output. This will not be a preamp for the "unwashed masses" a term that, whenever I hear it, makes me

I recorded the DC_coupled preamp's Phantom Turn On and Turn Off Characteristics. 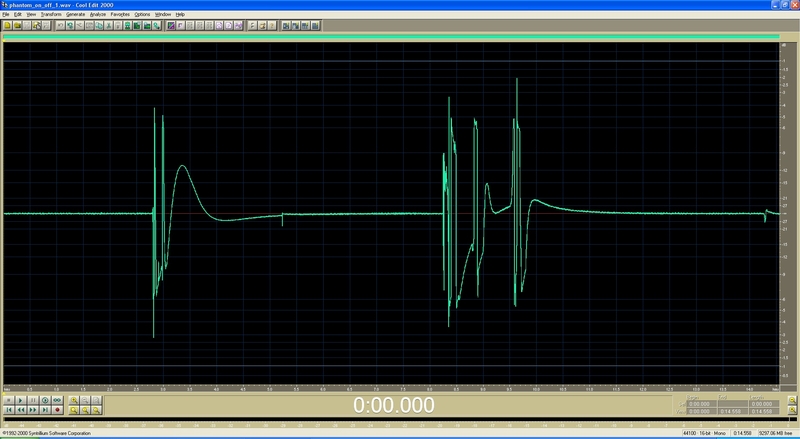 The microphone used was an Audio Technica AT3525.
The timescale is 500 ms per major division.

This is transformer-like performance.
An "active" mic preamp that was capacitor-coupled with 47 uF electrolytics could easily take 15-45 seconds to produce audio and a couple of minutes to produce low-noise audio.

The point is not how quickly the DC-coupled preamp turns on and off, but more importantly the speed at which both the common mode and differential servos work.

0 to +48 and audio in 2.5 seconds including microphone.
Not bad.
https://ka-electronics.com

I remembered that Roger had sent me the alleged-to-be (not by him but others) problematic Behringer ECM8000.

I've been repeatedly told the ECM8000 pulls unequal current in each leg.
Just tried it with the DC-coupled preamp and it works fine.

I couldn't tell if the ECM8000 was pulling unequal current in each leg by measuring the difference in Q-point voltage.
It was exactly 33.78 volts at both tip and ring which suggests a current of ~2.1 mA per leg.
This might be because the currents are equal, there is an internal DC shunt between legs (some people call them transformers), or it could be because the servo is correcting the imbalance.

Turns out the servo is correcting a huge current imbalance from the ECM8000.
I'm seeing ~ +/- 7V at the outputs of the Deboo integrator. With dynamic mics it's <<10 mV.
The ECM8000 requires a servo correction current of ~127 uA.
As expected, the correction current does not change significantly with preamp gain suggesting that the dominate error is mic current imbalance, not input offset.

In either case the ECM8000 works great with the input-capacitorless DC-coupled preamp.

In addition, The ECM8000, AT3525 and preamp all survive phantom faults.
https://ka-electronics.com

Even the behringer couldn't stop DC power by Wayne...

Yep, me and Edison.

I'm sure that there's a fully-unbalanced mic that wouldn't work, but based on shorting tip and ring I don't think it could break it.
https://ka-electronics.com

mediatechnology wrote:I remembered that Roger had sent me the alleged-to-be (not by him but others) problematic Behringer ECM8000.

I've been repeatedly told the ECM8000 pulls unequal current in each leg.
Just tried it with the DC-coupled preamp and it works fine.

There have been at least 3 different ECM8000 circuits. All quite different. Marik found that out when he did some stuff on how to improve one.

More annoying from my viewpoint is that the early ones used a Panasonic WM61A capsule which was had quite flat response and was consistent. They now use a cheaper, less consistent copy.
Top
Locked
213 posts