Relax in southern comfort on the east bank of the Mississippi. You're just around the corner from Beale Street and Sun Records. Watch the ducks, throw back a few and tell us what's on your mind.
Post Reply
319 posts

Update: Prior to 2017 there were no recorded exports of Covid-19 apparatus or reagents under HS 300215 or HS 902780.
If there were generic Coronavirus test kits they didn't exist under those codes prior to 2017.

Looks like they began planning that surprise back in 2017 and assigned HS codes...
https://ka-electronics.com


Controversial US based physician, Dr Stella Immanuel, is rejoicing over the dismissal of the complaints against her following her claim that hydroxycholoroquine can cure COVID-19 ‎by the Texas Medical Board.

She also attached the letter of clearance from the Texas Medical Board which she asked her haters to “read and weep.”

She said, ‎”Texas medical board dismisses the complaint against me. The haters have been defeated and God has showed Himself as my protector and defender. God bless TMB, God bless Texas, God bless America. Good will win. American will win. Haters read and weep.” 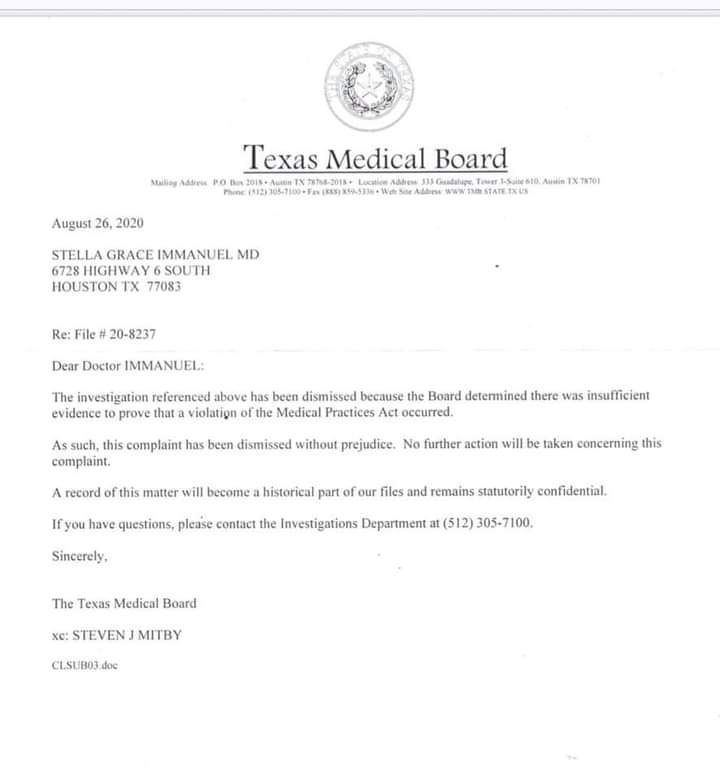 
Hours after her unceremonious Twitter ban for, we assume, presenting evidence that SARS-CoV-2 was created in a Wuhan lab, Chinese virologist Dr. Li-Meng Yan appeared on "Tucker Carlson Tonight," where she told the Fox News host that the virus is a "Frankenstein" which was designed to target humans which was intentionally released.

"It could never come from nature," she Yan - an MD/PhD who worked with coronavirus at the University of Hong Kong

"There is evidence left in the genome" - which Yan detailed in a 26-page scientific paper co-written with three other Chinese scientists. "They don't want people to know this truth. Also, that's why I get suspended [from Twitter], I get suppression. I am the target that the Chinese Communist Party wants disappeared."

When Carlson asked her why she believes the virus made it's way out of the Wuhan lab, Dr. Yan said "I worked in the WHO reference lab, which is the top coronavirus lab in the world at the university of Hong Kong. And the things I got deeply into such investigation in secret from the early beginning of this outbreak - I had my intelligence through my network in China, involved in the hospitals, institutes and also government."

"Together with my experience, I can tell you - this is created in a lab."

Since that time there have been multiple scientific confirmations of this so-called "conspiracy theory."
https://ka-electronics.com


Leaked emails between the senior adviser to Nashville's Mayor and a health department official reveal a disturbing effort to conceal extremely low coronavirus cases emanating from bars and restaurants, while the lion's share of infections occurred in nursing homes and construction workers, according to WZTV Nashville.


On June 30th, contact tracing was giving a small view of coronavirus clusters. Construction and nursing homes causing problems more than a thousand cases traced to each category, but bars and restaurants reported just 22 cases.

Leslie Waller from the health department asks “This isn’t going to be publicly released, right? Just info for Mayor’s Office?"

Four weeks later, Tennessean reporter Nate Rau asked the health department: "the figure you gave of “more than 80” does lead to a natural question: If there have been over 20,000 positive cases of COVID-19 in Davidson and only 80 or so are traced to restaurants and bars, doesn’t that mean restaurants and bars aren’t a very big problem?"

The response - from an official whose name was omitted from the leaked email: "My two cents. We have certainly refused to give counts per bar because those numbers are low per site," adding "We could still release the total though, and then a response to the over 80 could be "because that number is increasing all the time and we don’t want to say a specific number.""

According to a metro staff attorney asked by city councilmember Steve Glover to verify the authenticity of the emails, "I was able to get verification from the Mayor’s Office and the Department of Health that these emails are real."

Glover told WZTV: "They are fabricating information. They’ve blown there entire credibility Dennis. Its gone i don’t trust a thing they say going forward ...nothing."


Glover says he has been contacted by an endless stream of downtown bartenders, waitresses, and restaurant owners. Why would they not release these numbers?

"We raised taxes 34 percent and put hundreds literally thousands of people out of work that are now worried about losing their homes their apartments etcetera and we did it on bogus data. That should be illegal!" he says.

Again, we weren’t told by the mayor’s office this wasn’t true. We were told to file a freedom of information act request. -WZTV

The public health officers, Mayors and Governors are lying their asses off to wreck the economy and keep you in a state of fear.
They want to control every single aspect of your life.
If you don't push back you'll be living on a prison planet.
https://ka-electronics.com

Mueller's team wiped over 30 government phones before turning them in....

The media and some physicians who support Covid fraud have gone into overdrive to discredit Dr. Richard Bartlett's claim that Budesonide, an inhaled nebulized steroid, is a "silver bullet for the treatment of late stage Covid-19 infection yet we find numerous articles supporting the use of Dexamethasone which is also a steroid.


Dexamethasone oral (Decadron, DexPak) is a steroid prescribed to reduce inflammation in many conditions like Crohn's and rheumatoid arthritis. In June of 2020, a large UK study of COVID-19 patients showed the steroid had significant lifesaving effects on coronavirus-infected people with respiratory symptoms so severe they needed oxygen or ventilators.

Some people are being paid to lie about therapeutics, others are honest.
The supporting research around Dexamethasone tends to undermine the credibility of those saying "there is no cure for Covid-19" and that Dr. Bartlett is a fraud for suggesting that Budesonide has efficacy. Dr. Bartlett's patients say otherwise.

Many practitioners in the medical community appear to be pro-death.
Ask yourself why...
https://ka-electronics.com

I can imagine them being pro death with some patients.

This may be old news but Lancet is reportedly changing the rules about study data because of this one. Now they say two people have to have access to original research data, to make it harder to falsify results.

"Its about the testing we do with something called PCR, an amplification technique, better known to biologists as a research tool used in our labs, when trying to unpick mechanisms of disease.

I was frankly astonished to realise they’re sometimes used in population screening for diseases – astonished because it is a very exacting technique, prone to invisible errors and it’s quite a tall order to get reliable information out of it, especially because of the prodigious amounts of amplification involved in attempting to pick up a strand of viral genetic code. The test cannot distinguish between a living virus and a short strand of RNA from a virus which broke into pieces weeks or months ago."

"I have explained how a hopelessly-performing diagnostic test has been, and continues to be used, not for diagnosis of disease but, it seems, solely to create fear."

I don't know if this was discussed here already but false positive tests in nursing homes caused disease free patients to be moved into wards with other patients who actually had covid, no bueno...