This is where we talk about testing, measuring and repairing things. Sometimes we have to repair the equipment we use to test, measure and repair other things. It's an endless cycle of fixing the broken things we need to fix other broken things.
Post Reply
1 post • Page 1 of 1

I have a Tenma 72-1025 benchtop 4 wire LCR meter which has spuriously shown "Fuse" errors for a number of years. Otherwise its been a good instrument.

Sometime after I bought it I started occasionally getting fuse error indications at scale extremes showing a blown fuse located in either the force and sense lines.
I bought some spare GMA T100mA fuses from Mouser but never installed them because the internal one measured "good" and wasn't visibly blown.

I didn't use the instrument for awhile and when I did start using it learned that it needed new electrolytic caps in the power supply.
No big deal and it seemed to reduce the nuisance fuse error indications.
For awhile... 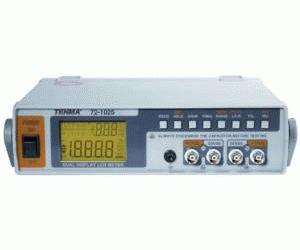 The MicMix MasterRoom XL-305 recreation is going to have series protection fuses in the driver transducers.
The drivers are low impedance - I didn't want the fuse series resistance to become a significant term in the damping factor.
So I tried to measure their resistance on the Tenma.
You guessed it: A fuse error indication.

I did my best to measure fuse resistance with the Fluke 8060 in relative mode using a 2 wire measurement.
As it turns out, low amperage fuses have a significant internal resistance.
Digging through my low-amperage fuses for the MicMix I found the spare T100mA Tenma fuses I had bought years ago.

Today I measured the new ones and the internal Tenma fuse on the Fluke.
Sure enough new ones measure about 6Ω and the Tenma fuse about 10Ω.
Was that the problem?

Yes it was. Duh.
The Tenma had not been BS'ing me.
Installing the new replacement fuses allowed it to measure low-value resistors and high-value inductors and capacitors again.
With the new fuse in the Tenma (and it able to measure low values again) the old T100mA measures 10.379Ω a new one 5.945Ω.

Looking at the original fuse under magnification with its spiral-wrapped time-delay element there is a little physical distortion.
The new ones don't look like that way.

Next time the Tenma 72-1025 screams "FUSE" by beeping loudly I'll know to believe it.
Because I'm now a believer there's an extra spare stashed inside.
https://ka-electronics.com