The difference between a "conspiracy theorist" and a truth-teller is about one year.

I think another advantage to a JFET input vs. a bipolar input could be the reduced input bias current FETs provide. I brought this up over in the preamp discussion over in Document. Maybe JR will weigh in.

Until today I had never thought about it but something bothers me about connecting a 5532 or 5534 input directly to the MM cartridge. That first stage is DC-coupled to the source. I don't know what the motivation was but I suspect the absence of a coupling capacitor at the input is a good thing from a LF noise standpoint. If a capacitor was used, it would be in series with the source impedance raising the overall source impedance seen by the op amp as the frequency is lowered.

The op amp is a 5534 with a worst case (over temperature) Ibias of 1000 nA. The IEC model for a MM cartridge places the cartridge's DC resistance at 1000 Ohms. What's the harm in a uA flowing through the cartridge? I don't know.

But consider this: 1000 nA x 1000 R is 1 mV. Doesn't seem like much DC until you consider it's in the same order of magnitude as the signal being amplified. OK, so we AC-couple the amp somewhere. The DC offset in the output isn't the worry.

The cartridge must have a bazillion turns of some very small wire to become a 500 mH inductor. The cartridge - working as a generator - takes a lot of turns and a good magnetic circuit to get decent millivolt-level output with microscopic deflections of the stylus.

Don't we make the cartridge a motor if we introduce DC into it? Even a mV? If it takes some groovy deflection to get a mV output don't we get about the same stylus movement in return from the DC that gets pumped into it as motor?

Seems bias current in the order of uA flowing into a MM cartridge can't be a good thing since it would appear to bias the magnetics and mechanical system.

What is the effect of Ibias on the cartridge's magnetic and mechanical system? Does 1 mV of DC across the coil matter?

I think the P10, with its FET input, still looks better than a 5534-class bipolar input because it's bias current requirement, when DC-coupled to the cartridge, is orders of magnitude lower.
https://ka-electronics.com

A Shure M44 from that "junk" box of old phono cartridges provided a good network to check noise performance.

Contrast that with an Audio Technica P5 dynamic mic. The P5's internal transformer secondary measures 4 Ohms DCR and 3 uH inductance. This is one reason why MM phono cartridges and dynamic mics require such different preamps.

P10 test circuit with a Shure M44 connected to the input using a single-ended connection. A 60 Hz DSP notch filter was inserted.

This above plot is with one of the differential inputs grounded (as shown in the sch) using a conventional single-ended connection. The input R was 24K3x2 (48K6). Input C 100 pF. Note the hash around 5 and 6 kHz.

The overall noise level is <-70 dB. I had to turn off every Triac-based dimmer in the house to perform this measurement.

This is the fully-balanced noise with the M44 connected differentially and floating. I split the gate resistors to 24K3 and grounded the middle. The cartridge is loaded differentially in 48K6||100pF. Look around 5 kHz.

P10 test circuit with a Shure M44 cartridge connected to the input using a fully-balanced connection. A 60 Hz DSP notch filter was inserted.

One of the issues of going to a fully-balanced connection is that the cartridge shell usually has a strap tying it to LG or RG. That would seem to require being cut and the shell grounded via the arm.
https://ka-electronics.com

I have routinely made engineering calls with much thinner justifications than this... So I agree with you completely, I just don't feel like going back and justifying decades old engineering decisions. it seemed like a good idea at the time and still does.

Ricardo is the only one claiming a direct coupled 553x is as good as it gets. Or perhaps he means as good as it needs to be, while i don't want to put words in his mouth.

I suspect dropping a new generation low noise JFET input into that 5534 socket would be more than adequate and with low dc input offsets you might even lose that big electrolytic between stages that makes me nervous too. Modern bipolar opamps have much lower input bias currents than the old school 553x (first order bias cancellation), so most would probably moot the Ib concern.

If you really want to empirically confirm a phenomenon associated with DC current there, rig up a few 1 meg resistors to a cart and listen to it playing back as you dump a few uA of DC current into it,,, or not. if you can't hear any difference from 10x the bias current or more, it is probably innocuous at 1x.

The discrete/hybrid JFET front end is sweet and perhaps more than you need, the 553x is not perfect by any stretch of the imagination.

If it's worth doing, it's worth over-engineering.... that's what we do. Anybody can design merely adequate circuits.

I don't think it can get any simpler. I suppose I could crank up the current but I may want to run this on batteries.

I do think a pair of LSK170s, perhaps matched, or other discrete N-FETs ought to do pretty well here. As you would say JR, YMMV.
https://ka-electronics.com

I decided to post a couple of more snapshots before I tear down the protoboard and build this.


I want to use this design because you can run the front end floating. 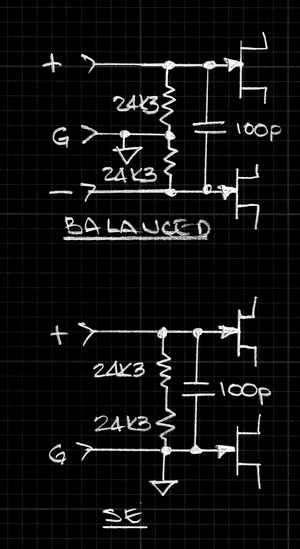 In some earlier tests the THD performance appeared to improve with a ground-referred SE input connection when common mode rejection was realized by the THAT1240. Taking a single-ended output from the TL072 had higher THD.

I may wire the inputs single-ended using coaxial RCA connections to avoid having to mod the turntable wiring despite the obvious improvement. I don't see a way to float the cartridge wiring without taking 2C shielded all the way back to the tonearm. But, even with that limitation, I do think having a ground-referred fully-differential input is a better way to go.

Gold may be able to try this with fully-balanced wiring.
https://ka-electronics.com

I'm not sure I understand why that much increase in noise between different grounding approaches. The Johnson noise of 48k vs 2x24k summed incoherently may be a wash. I recall some interesting discussions with Buff about the transamp inputs where relatively high floating impedance to ground and low impedance between inputs would partially cancel out the noise current term.

I don't expect JFETs to have this noise current term of any significance, but before making final decision maybe drop a 1k R between the two inputs (if you weren't already using a cart or dummy cart).

Re: wiring between, perhaps look at the turntable to scope out their plan? They usually ground the metal parts and to some extent rely upon that for shielding, perhaps bond the cartridge lows at the turntable to that local ground, then carry that back to the preamp 2 conductor shielded? Or maybe soft bond the grounds through a 10-100 ohm... ?

It has been a very long time since I thought about this.

edit- yes Gold needs to balance over any distance... perhaps go single ended at the very end of the run. That still doesn't create a loop with the telescoped (green wire) ground, as long as the balanced receiver is floating. /edit

I didn't see those kind of changes with a dummy cart. Floating was still an improvement over SE but maybe 4-6 dB (hum) eyeballing the graphs.

Both graphs are a 200 sample average and it looks like it's external hum with high harmonic content that's producing the big changes with open inputs.
https://ka-electronics.com

mediatechnology wrote:Follow this link for an ADI tutorial on Noise Spectral Density by Matt Duff.

This doesn't quite explain current noise.

There's an old AD note which was very good on precise calculation of noise including summing several bands when response & source Z isn't flat with frequency. The worked example a RIAA preamp with a real MM cartridge. It shows the noise spectrums I got when I was playing with my MC preamp and trying to figure out why it was quieter than a MM into a good MM preamp.

I'm not sure using a half speed turntable gets you much. It depends on how the cartridge tracks clicks & pops. If there was no change (and of course there is cos HF trackability falls off rapidly with frequency) you'd get the same difference sampling at 2x your previous fs. Assuming perfect trackability, a click or pop will have exactly the same frequency ratio to the music.

The possible gain is HF mistracking does put a lot of Intermod. crud lower down. "Shing" instead of "Ting".

Hmm...m. You need to sample with high fs anyway cos sampling at 44.1 or 48kHz will lose the supersonic stuff that the better de-clickers use.

I had a Garrard de-clicker which worked well. Very crude analog detection and sample & hold system. Flat preamp, process & then RIAA like you are proposing. They had a JAES preprint IIRC.
________________________
John, I saw the full circuit of P10 over on prodigy. Its got enough solid BS ... I mean snake-oil hand squeezed from Unobtainium by virgins to sink a battleship. You need a better Marketing VP.

This doesn't quite explain current noise.

That vid didn't explain current noise at all. Still a good background though. Never got the follow-up question.


There's an old AD note which was very good on precise calculation of noise including summing several bands when response & source Z isn't flat with frequency. The worked example a RIAA preamp with a real MM cartridge. It shows the noise spectrums I got when I was playing with my MC preamp and trying to figure out why it was quieter than a MM into a good MM preamp.

Which one? Did Jung do that one?
https://ka-electronics.com

There's an old AD note which was very good on precise calculation of noise including summing several bands when response & source Z isn't flat with frequency. The worked example a RIAA preamp with a real MM cartridge. It shows the noise spectrums I got when I was playing with my MC preamp and trying to figure out why it was quieter than a MM into a good MM preamp.

Dunno which one. Remember I'm presently a beach bum. You'll recognise it when you see it cos the MM RIAA example.