Where we discuss new analog design ideas for Pro Audio and modern spins on vintage ones.
Post Reply
15 posts

The 5171 gain step arrangement required a work-around to overcome a 13.6 dB initial step size, (13.6dB to get to the 1 dB/step range). Both a 13.6 dB input pad and switched output gain stage were needed. The circuit worked quite well and I set it aside. Now that the THAT5173 is available with 0-60 dB in 3 dB steps, the circuit becomes incredibly simple.

The 5173 version is not tested - I'm waiting on samples - but results using the 5171 lead me to believe the following is doable: 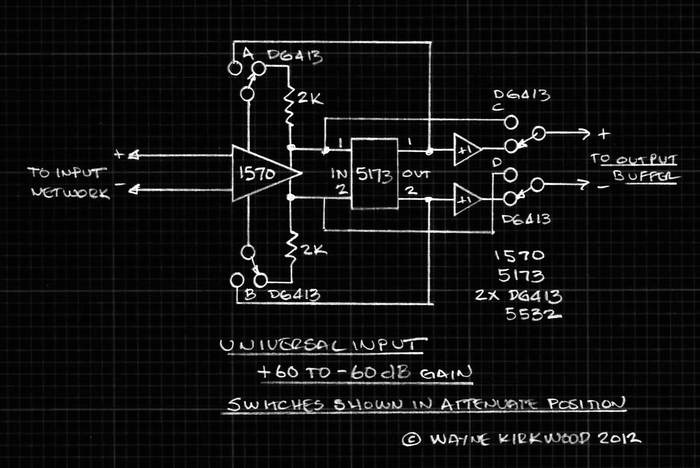 Two DG413 packages switch the location of the 5173 U-Pad from providing feedback (gain) to being in-line with the output (attenuation).
The switches are shown in the Line (attenuation) position.
The 1570 acts as a voltage follower which drives the 5173 U-pad inputs.
The 5173 output is buffered by 5532-type voltage followers to prevent loading the 5173 pad and upsetting taper.

A second DG413 package switches the output buffer to either the 1570 outputs (gain) or the 5173 buffered output (attenuation).

The DG413 provides guaranteed "break-before-make" operation.
IIRC the typical "dead time" is about 20 ns.
The dead time is so short, neither the 1570 or +1 buffers see loss of bias current. (I didn't even use bias resistors for the 5532 since the attenuator and 1570 provide a DC path.)
(None of these parts are going to move in 20 ns.)
There is a one Vbe offset at the output of the 1570. The output buffer sees this in common mode. AC-coupling might be required.

My experiments did not switch gain/attenuation on zero cross, but during silence the transition was virtually clickless.
The 5173 Busy output and GPOs can be used to switch the DG413s, phantom on/off etc.

I wanted to go ahead and publish this because the introduction of the THAT5173 made it so simple.
I'll keep updating this post once I get some samples.
As I understand it the 5173 is available now - I'm waiting for one on a DIP carrier.
https://ka-electronics.com

It's better to maximize the copper area under the chip to spread the heat better, therefore having the pad on the top and the bottom of the PCB joined by vias is a good start. My design has 4 vias to stitch the pads, not 5, the number doesn't matter that much at the end of the day. =) I have 4 to fall under the cheaper price bracket of my PCB fab house - that way I can have larger annular ring spec and looser tolerances, making production cheaper.

Also, and I wish someone told me this before, as I destroyed quite a few chips that way... =)) ...pay extra attention to the stencil apertures (solder paste layer). Make sure you don't extend the pad on the PCB to the pad boundaries of the chip (so, do NOT make the PCB pad the same area as the chip's pad! as it greatly increases possibility of solder shorts). Download Mentor Graphics' free LP Viewer and consult suggested pad dimensions. Also, contract stencil pad apertures by 1.5-2 mil and make the center pad window-style (i.e. 4 smaller squares, not a single blob). I've had good results with 5mil stencil height.
Top

I recall on the 1570 demo board there being both upper and lower pads and thermally-connecting vias.

I suppose that there might be a small difference in thermal resistance using 4 vs. 5 vias but probably not much and that would depend on which way "up" was.
https://ka-electronics.com

Thanks guys! Exactly what I needed.

promixe wrote:My design has 4 vias to stitch the pads.

[s]Actually, I'm having a little trouble getting the device's thermal pad to "stitch" to the vias and the bottom layer thermal pad on my layout. I'm working in Eagle, and it seems there are several ways to do this. If you're using Eagle, would you mind sharing your library component for the 1570?

I figured it out. Apparently in Eagle, it's tricky to include the thermal pad and vias in the component package itself. So I made a new 1570 component without them and simply added them to the board layout after the fact. I put reference guides as to where to place the thermal pad and vias in layer 49 of the component, and also made a package for the DIL16 prototyping version of the 1570. Here's the library component if anyone's interested:

juniorhifikit wrote:also made a package for the DIL16 prototyping version of the 1570.

You may be interested to know that I make prototyping adapters with 1570 and 5171 on board - http://diy.innersonix.com/shop/thatdip-adapter

Unfortunately I don't use Eagle, so I can't suggest much, but it seems you figured it out already. =) Make sure you don't run ground copper underneath the Rg traces of 1570 (page 10 of the datasheet has the info).

juniorhifikit wrote:I figured it out. Apparently in Eagle, it's tricky to include the thermal pad and vias in the component package itself. So I made a new 1570 component without them and simply added them to the board layout after the fact. I put reference guides as to where to place the thermal pad and vias in layer 49 of the component, and also made a package for the DIL16 prototyping version of the 1570. Here's the library component if anyone's interested:

I don't know that I'm a library wizard with eagle, and I'm using an older version of eagle so my libraries are not compatible with newer releases. When I made the footprint for my class D IC with a bottom pad, to make the vias I just added holes between the two top and bottom lands, and the PCB fab process will plate through the holes and make them vias, even if they aren't called vias.

I think I used less vias than TI called for in my design, to use a larger minimum drill size. but it works fine.

=====
Note: My understanding of the 2 layer PCB process, is that vias are formed by first drilling all the holes in a sheet of double sided copper clad stock, attaching electrodes to each side, then additive plating material into the holes between the two electrodes so any hole will get plated.

Another potential issue with pads under ICs is any contamination or moisture that creates vapor pressure when heated could force solder out perhaps creating lead bridges. So larger holes under the part can somewhat mitigate any vapor pressure, while this is a pretty mature technology so I've never had the problems like some report.

FWIW the uP chip I'm using also has a bottom pad, and that's a tight footprint too... but no problems.

I'm still a BGA virgin and not in a hurry to change that while the small packages are attractive.