The medical industry has pivoted from helping humanity to exterminating it.

The TI PCM4222 Evaluation board makes a great DIY A/D convertor for Test and Measurement or Recording.

The PCM4222EVM, available for $149 US from Mouser, Digi-Key and the TI store, is a good value despite being a bare bones board.
Having been designed to showcase the PCM4222 the performance is quite good.

Ross Martin is a big fan of the PCM4222: http://rossmartinaudio.com/index.htm and it gets great reviews on Gearslutz.

The PCM4222 evaluation module signal path is short having only an OPA1632 differential op amp as modulator driver.
There is no combo mic/instrument/line input PGA to add noise, distortion and gain uncertainty to measurement. 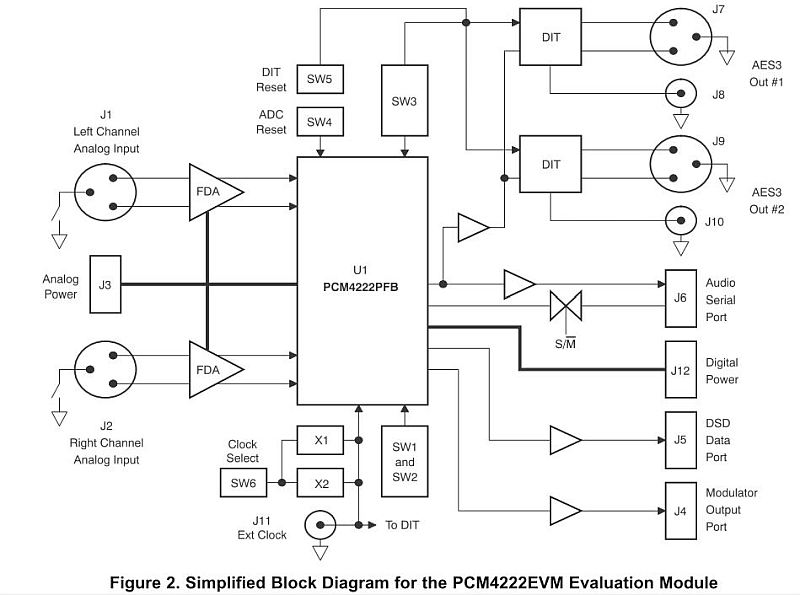 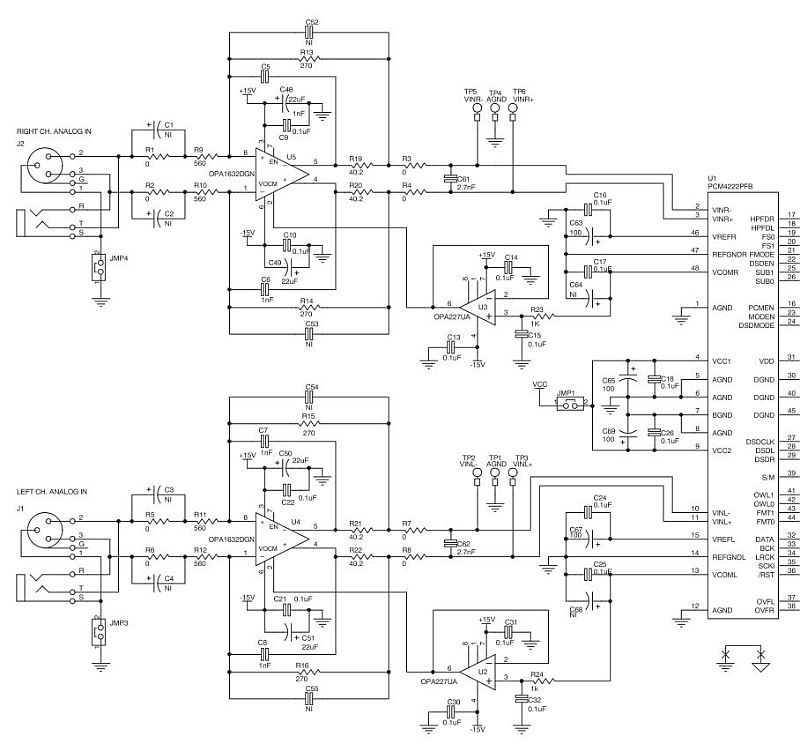 The PCM4222EVM left and right inputs are balanced XLR/TRS with 560Ω/leg impedance.
0 dBFS is 4.2 V RMS or about +15 dBu.
Unbalanced 1/4 TS can also be used for single-ended sources.

When the inputs are not connected and left floating there is a 1.95 VDC common mode (i.e. relative to ground) potential on the input connector's tip and ring.
If DC-coupled to the source, the source will have to sink about 3.5 mA from each input.
This will force op amp outputs driving the PCM4222EVM into class-A so its not as bad as it may seem.
Just be aware that there is current-limited DC on the inputs.

The differential voltage between inputs however is essentially 0V.
A differentially-connected transformer wired to pins 2 and 3 on this input does not see significant secondary DC current flow.
If the transformer has a center-tap it should be left floating.

If AC-coupling capacitors are installed do note that the the polarity markings on the schematic and the layout are incorrect.
They should be at least 47 µF or greater with the positive side pointing to the OPA1632.
High value resistors (100KΩ) to ground should also be installed on the connector side of the input capacitors to discharge them.

For test and measurement applications a higher impedance input stage with attenuator would be helpful.

A USB interface requires a third-party board and use of the boards' Serial Audio I2S interface.

I prefer using AES interfaces for test and measurement because the XLR and coaxial outputs are transformer-isolated.
USB is almost never galvanically-isolated and it often introduces spectral spurs at 1 kHz.

Scientific Conversion has done considerable research on the subject of jitter in the AES interface.
The site has several AES papers on the subject dating from the 1990s.
The 2014 SMPTE paper has some interesting eye pattern comparisons: http://www.scientificonversion.com/SMPTECables9.pdf
For the PCM4222 TI apparently chose the best AES transformer they could find. 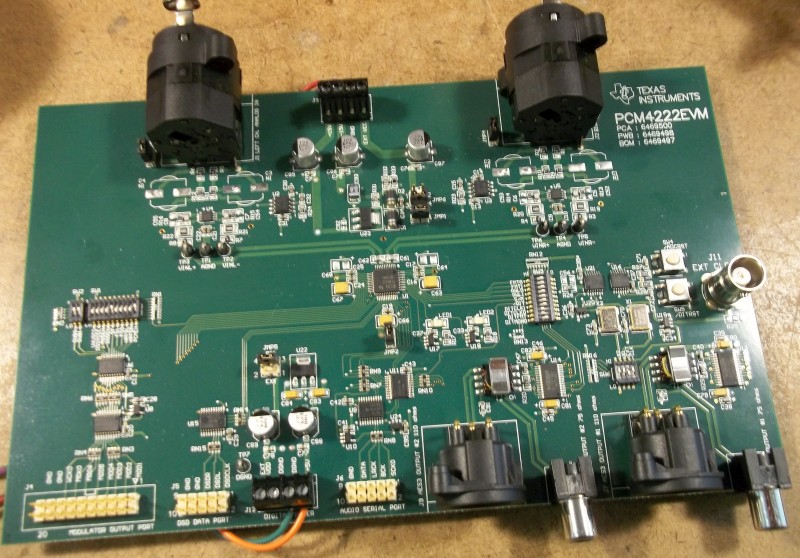 Configuration, including sample rate, is by DIP switches.
This may limit its use when frequent changes in sample rate are required.
In my application I intend to work at 96 kHz with the board internally-clocked. 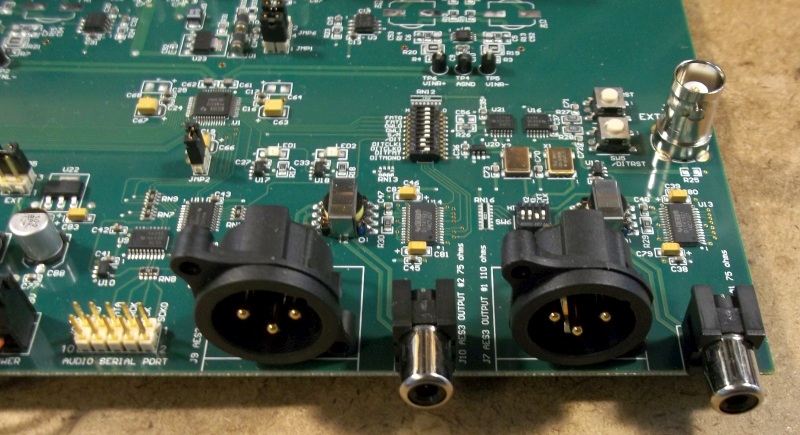 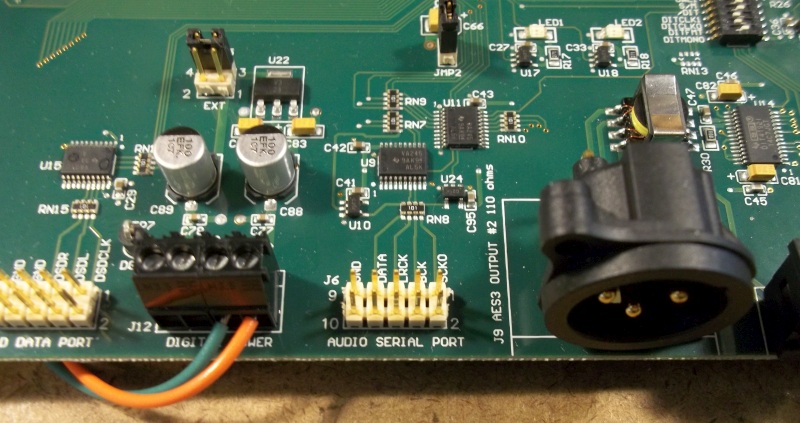 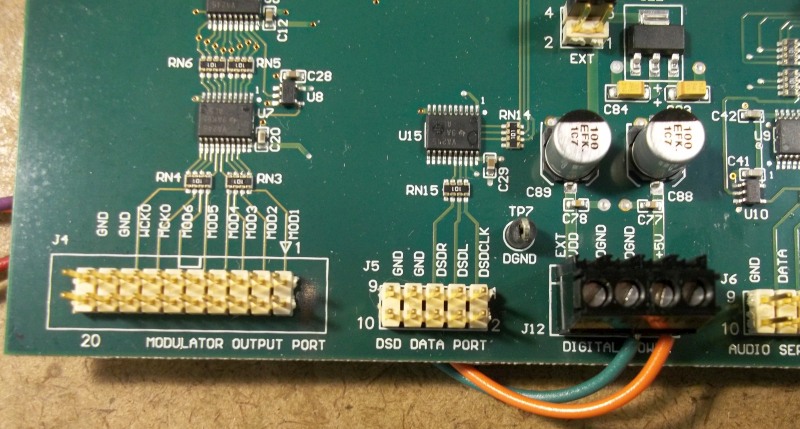 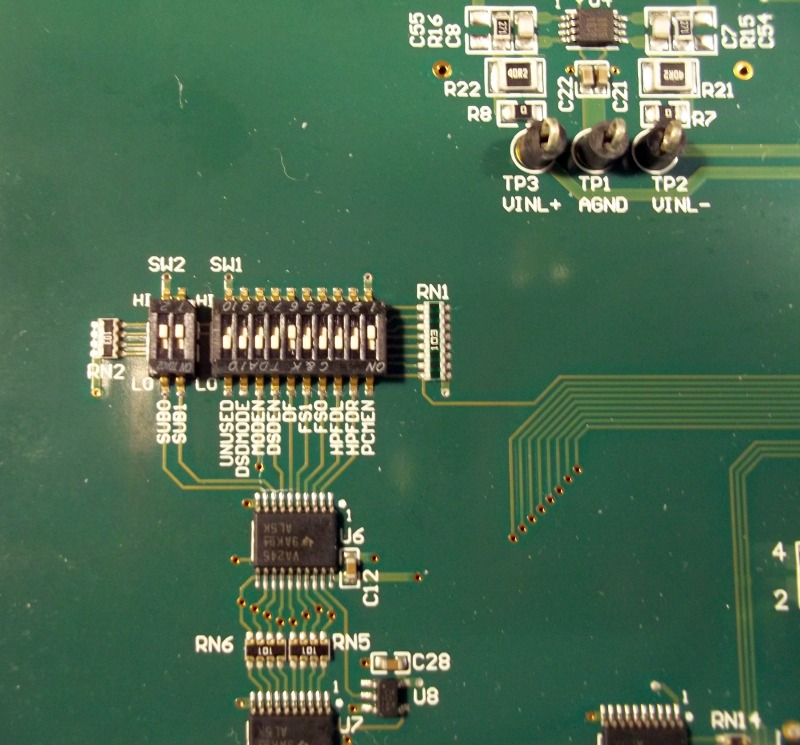 Note that in the pic below RN13 (below SW3) is missing.
RN13 is absent on both my PCM4222EVM Evaluation boards and I've never seen a picture of one with it installed.
(A possible explanation is that an error in the BOM shows RN13 to have 8 resistors. The layout uses a 4 resistor network.)
I was alerted to this by forum reader Frank Lacy. Thank you for pointing this out Frank.

RN13's absence prevents proper pull-up of the DITFMT and DITMONO lines when asserting them Hi.
In the "Lo" positions shown DITFMT (Left-Justified) and DITMONO (Stereo) the floating lines are pulled down by the switch.
With RN13 out-of-circuit, the PCM4222EVM DITFMT and DITMONO lines may float to an indeterminate state when switched "Hi."
For proper Mono or I2S operation, RN13, a 10KΩ X4 0603, should be installed. (Only two resistors in the network are used.) 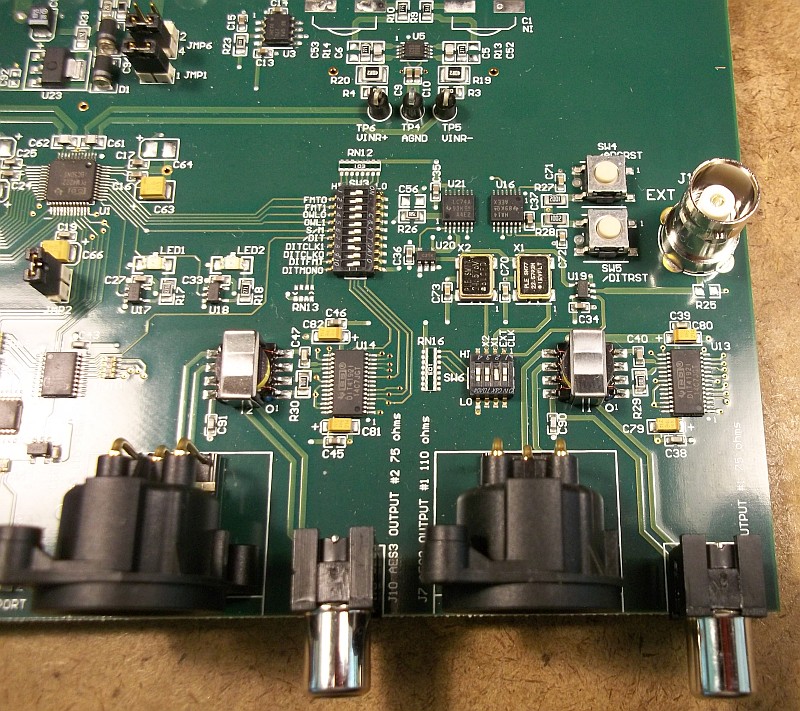 The noise performance of the PCM4222 is outstanding.

This is the 96 kHz idle channel noise of the PCM4222EVM with open inputs: 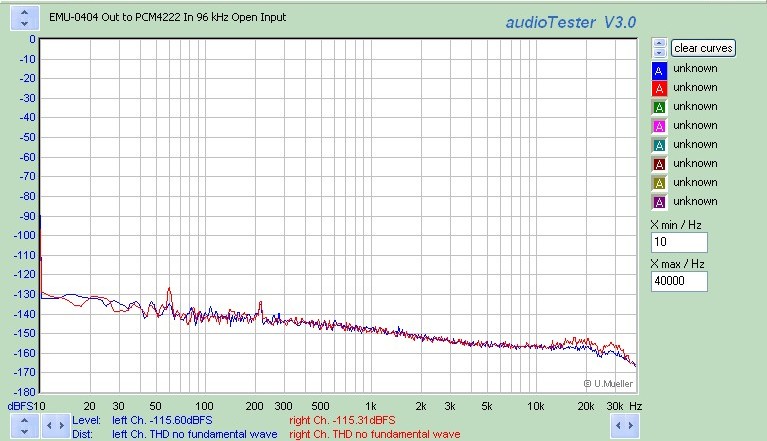 With the PCM4222EVM inputs shorted: 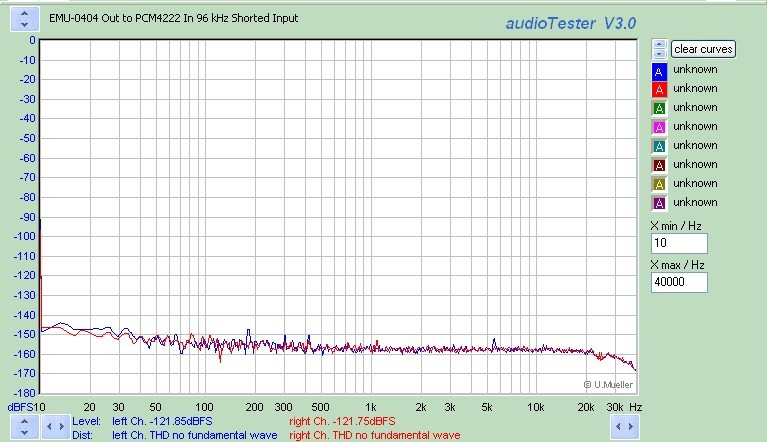 The A-weighted noise of the PCM4222EVM with open inputs is within about a dB of the converter specification. 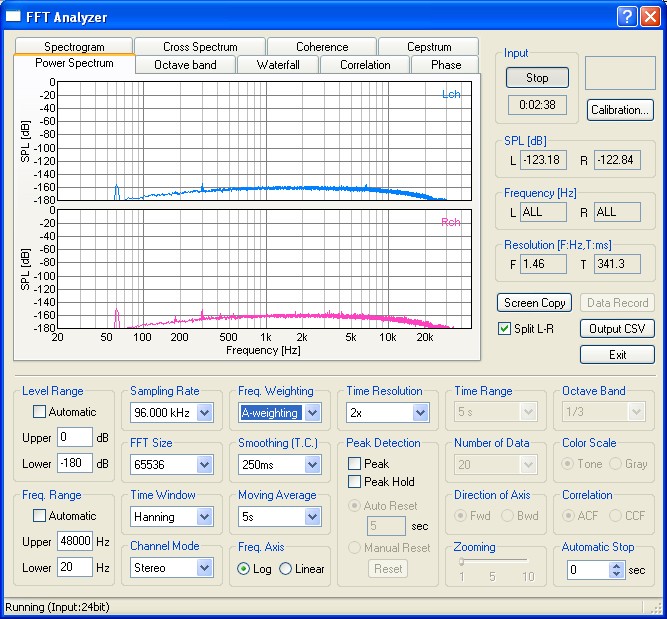 To measure the distortion of the PCM4222EVM I had to build a prototype oscillator based on Viktors Mickevics design.

The oscillator is unshielded on a Protoboard with some hum. 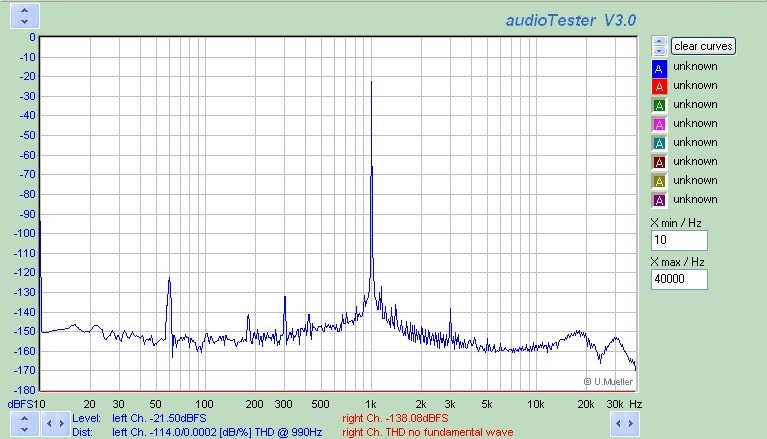 How To Mount The PCM4222EVM

One of the things you immediately notice about the PCM4222EVM are that there are no mounting holes.
This is a problem if you want to put it in an enclosure.

Examination of the Gerber files shows that the area on the bottom silkscreen that marks the location of the plastic bumpers is a safe area to drill.
PCM4222EVM Gerber files http://www.ti.com/lit/zip/slac510

Fortunately there are no active signal or power lines (except the internal ground plane) near this area. 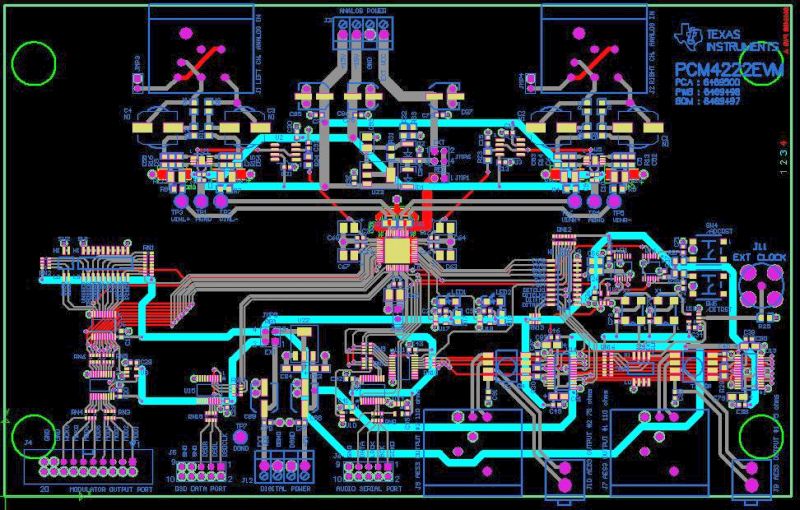 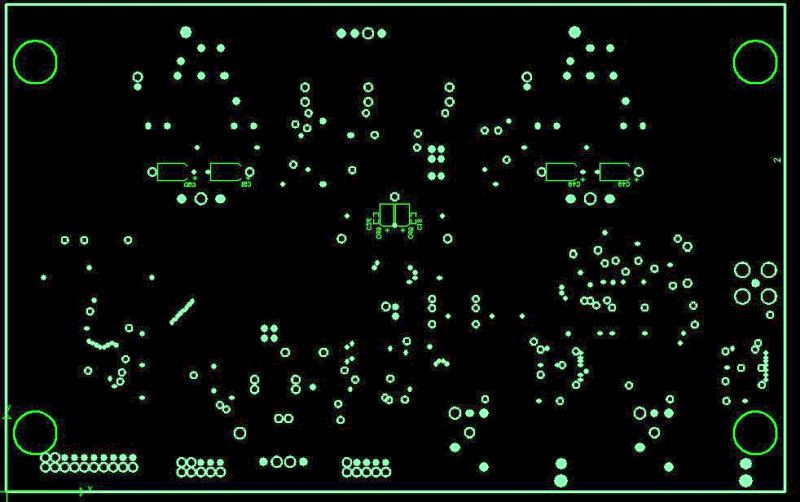 Drill holes in the center of the circles and then use nylon screws to avoid tying the board's ground to the screw.
The bumpers have some strong adhesive - pushing them sideways (adhesive in shear) seemed to work best. 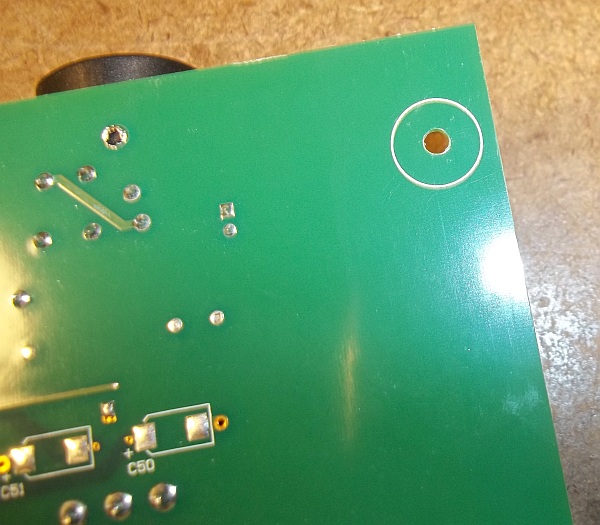 It works! Now the board can be mounted. For now I'm using metal 4-40 screws and aluminum hex spacers.
One screw has about 10Ω from the internal ground plane to the spacer so some form of insulation either nylon screw, plastic spacer or a collar washer (from a heatsink mounting kit) might be a good idea.

Once the spacers were attached I wired the power leads to the underside of the PC board.
This is tidier and also allows the top-side terminal block connectors to be used to feed power to other devices.
The DIN power connector mates with the Meanwell desktop supply. 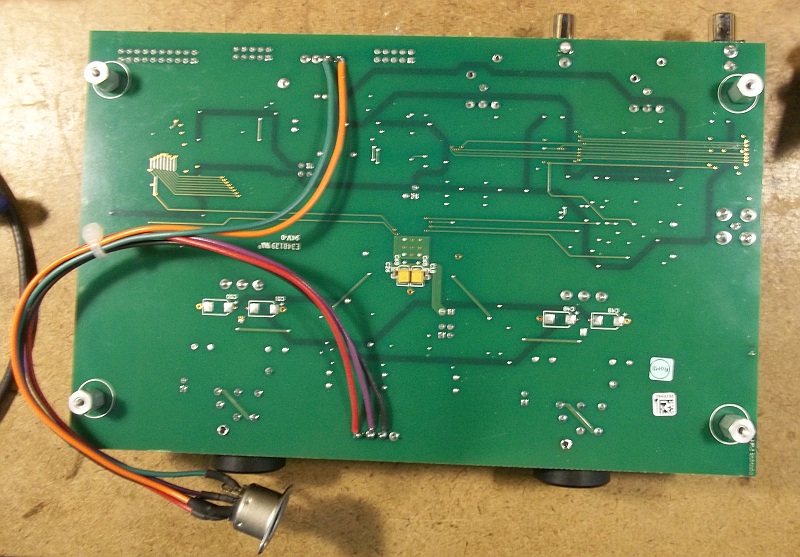 Oops. I forgot to mention that another application of my PCM4222 is to digitize vinyl.

Hey John you might be interested to see that I nulled your P10 EQ to Olaf's IIR RIAA. (Post #2) viewtopic.php?f=15&t=885
My first set of tests revealed converter differences and not EQ differences.
https://ka-electronics.com

I've posted some more measurements of the PCM4222 Evaluation Module in the original post.

To test the distortion I had to prototype Viktors Mickevics Ultra Low Distortion Oscillator. 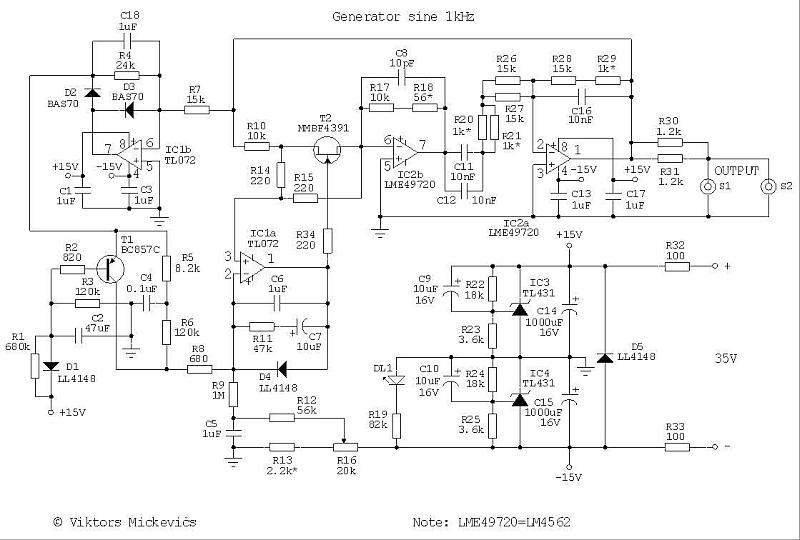 I own a PCM4222EVM evaluation board .

I believe from inspection that the XLR digital AES connectors J7 & J9 are mounted incorrectly at the TI factory.

The xlr's appear to be placed too far back. I do not think an adaptor will help as the pcb would get in the way.

Can anyone please confirm this? Is this an error on all versions of this board?

They are too far back.

I think they need to be unsoldered and flying leads extended to panel-mounted male XLRs.

The front panel look to be correct though Left and Right are reversed.
https://ka-electronics.com

Thanks mediatechnology for the confirmation. yes the analog ones are placed fine and the AES of wrongly placed. i wasnt sure if i was missing a bracket.

It occurred to me that you could leave the existing AES connectors and tack-solder flying leads to a panel-mounted one. I've never used the second AES port.
https://ka-electronics.com

thanks for your reply. yes good idea, although i am right out of space in the box. i would need to reshuffle some parts. I hoped it would just slot in as the PDF states "chassis mounted for AES j7 j9"

i am in communication with TI so hopefully they will email something interesting.

i shall eventually find out about the benefits of the external regulators and so shall post that info here, just in case you find it interesting too.
There must be a good reason for TI to go to all the trouble to allow us the option. Hopefully improved sound, lower noise? But I suppose it could just be stability.