I decided to make a THAT2180 VCA (actually three) into an all-pass filter. This is a three pole demo. I'm not going to stop building until I get to eight. A stereo output is derived from polarity inversion and a sum/difference network. Here's a quick and dirty demo.

I want to put this under envelope control as well as sweep. No resonance control yet. Rock on!
https://ka-electronics.com

Ever since I built an 8 pole "DynaPhaser" prototype back in the early 80's using a pair of SSM2040s I've wanted to rebuild that prototype using modern VCAs. I recalled that listening to it was such a mindf**k (pardon my English) it was worth revisiting.

One of the things the SSM2040 had going for it was expo control - something that the DynaFlanger never had. I modded a DynaFlanger for exponential control long after it was out of production and it "tracked" a lot better under both envelope and frequency control.

There are a lot of good phaser designs coming out of the DIY modular synth world over at electromusic. Thomas Henry, Jurgen Haible and a lot of other folks have done some great designs using FETs, discrete transistors, Vactrols, OTAs etc. Maxim even has an app note using digi-pots. Most of these designs (excluding the Vactrol) don't do line-level well.

I've only seen one VCA-based design using the SSM2164 from neil's webbly world:

Neil's design is very clever but I wanted to use a THAT2180 as the basic element for higher performance. The only other cite I found using a true VCA was in a later Aphex 1537 datasheet:

Something about seeing a backwards VCA feeding it's own input bothered me. I didn't immediatley see what was going on. Since the THAT and SSM VCAs are current in/current out I took a closer look at the 1537. 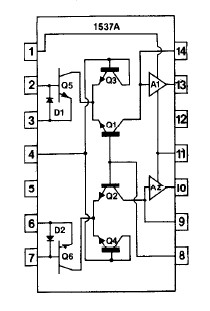 OK, so the Aphex 1537 is current in voltage out. But the simplfied drawing still doesn't make sense. What we want is a voltage-variable resistor.

OK, still odd-looking but closer examination of the resistance versus gain equation shows that the resistor is being bootstrapped by the VCA.

OK, I'm starting to get it. We have a voltage in/voltage out variable gain block which is overall non inverting. We take a lower-valued resistor and by driving the opposing end with the same polarity we synthesize a larger one and put the whole gizmo under exponential voltage control. Cool!

So we've got some pretty good dynamic range (of resistance change) available under voltage control.

Note: The following schematic is an earler topology which has since been abandoned in favor of this one: viewtopic.php?f=6&t=368&start=31 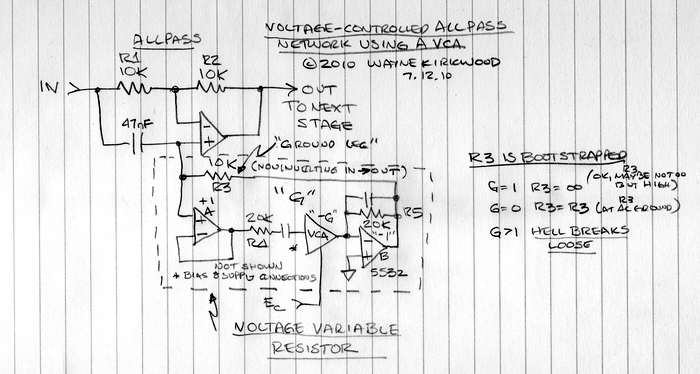 The above is a simplified single all-pass network. I cascaded three of these for the demo. The outputs are sum/difference and one is polarity inverted. (I did that for maximum mindf**k.) Control of the demo was done manually and the unit has a good CV vs effect "knob feel" with a linear CV.

R3 is the voltage variable resistor with the "ground" end driven by the bootstrap. An input buffer is required to isolate R4 from R3 permitting a large change in delta-R3. Though not as elegant as Neil's modified all-pass topology (this one uses one more op amp per stage) the THAT2180 should outperform the SSM2164.

When I revisit this (hopefully it won't be another 28 years) I think I'll build a pair of four pole units which can be cascaded or separate with inverted CV responses.
https://ka-electronics.com

Should I continue with this?
https://ka-electronics.com

Sounds pretty exotic... With plug-ins it's probably easier to make a flanger than a many pole phasor these days.
-----
I've seen and done a few designs with a gain element in shunt with a fixed resistor, but typically it was to get around the low performance of cheap gain elements.
------
I did one oddball VCA based version of the dynafex(?). A combinations of downward expander and sliding LPF...but I did the expander by subtracting a full range signal coming from one VCA from the dry path, and made the sliding LP by using a VCA to drive a cap out of phase fed by a fixed resistor to effect the LP filter... this minimized the modest linearity of circa '80s VCAs. since my dry audio path wasn't through the VCAs. The VCAs were only in the path when cut and attenuated.

It was a very nice piece IMO, but too cool for the room for AMR (Peavey's recording division ) dealers, so the product floated like a lead balloon.
======

If you make a 12 pole phasor, what is your strategy for spacing/aligning the poles? With flangers they line up on neat fixed intervals.

I think for now I'll align them using equal C values. That's how I usually see them. The Ec will be bused and they ought to track well.

I may experiment with having an inverted CV to four of the (eight) poles so that as one goes up the other sweeps down. I also need to revisit Thomas Henry's Barber Pole design.

I just replanted (on the protoboard) a four pole section to compact the layout and will duplicate it for another four poles. I may have something more for us to listen to soon.

Can you figure out John what Neil is doing here? http://www.milton.arachsys.com/nj71/pdf ... pf-sch.pdf There's something I'm missing. The capacitor networks in the VCA cell don't seem large enough and are almost the standard ADI application values for Cin shunt and Cfb. Where's the C for the all-pass?
https://ka-electronics.com

The 220pF look small, but keep in mind that class A gain cells have a lot more range for attenuation than gain.. Down at -20 dB or -40dB perhaps not so out of whack? While I must concede I am not familiar with the SSM stuff, so I'm guessing about the innards.

Also keep in mind that efx are not always about linearity... maybe it just sounded good?

ASSuming the SSM 2164 is a virtual earth input, that almost looks like a model of an opamp, where the gain cell and integrator stage is performing the internal compensation pole, so the transfer function is the closed loop gain (unity inverting), but modified by the open loop transfer function (90' phase shift?).

Of course don't rule out that the schematic values could be wrong..

No complication for the 12 pole - just running out of VCAs and protoboard room. I think this thing could be cascaded in three blocks of four to do a 12 pole.

I'm not sure if the SSM2164 inverts or not. It looks like a voltage variable integrator with local feedback taken into the input summing node. That 220 pF Cfb (if that's what it is) looks too small. That's what the schemo and parts list appear to say but if you look at the board photo they look more like 2n2.
https://ka-electronics.com

Here's a demo of the 8 pole with the last tap summed with direct. This one is mono output.

This following sample is with both the 4th and 8th sections summed with the direct. It's a little thinner but more "swirly."

Stuff isn't flying through your head compared to the first 3 pole demo though it can by deriving separate L and R outputs.

By choosing which taps and whether to add or subtract them to the direct provides a full pallet of effects. The one using two taps may sound a little thin (with the 4th tap added the effect has more "swirl" and less LF) but being outrageous is the point.

I don't really have a proper Ec buffer for the VCAs yet.
https://ka-electronics.com

John: I found another cite for an SSM2164-based phaser and it looks like the Cfb around the I-V converter were made bigger so that it acts more like a voltage variable integrator: http://userdisk.webry.biglobe.ne.jp/000 ... ph0505.GIF

From looking at the all-pass network, doesn't it look like an SSM2164 paired with an I-V is inverting overall? Notice how the VCA output is summed back in through the inverting input.

I think the 30K feedback from the VCA out back into the SSM2164 input current node is a trick they don't show in the datasheet to alter the gain response. If you look at the voltage-controlled panner figure in the original SSM2018 datasheet you'll see something like this. http://www.analog.com/static/imported-f ... df#page=12

Roger: Thanks. I've never heard of Klaus Schulze. Or have I?

One thing I learned from yesterday's experiments is that BIFET op amps may indeed be a better choice for the two which connect to the left-hand side of R3. In my prototype I went "all bipolar" (NE5532) thinking that the circuit impedances would be low enough. At DC they are. But when R3 becomes R3' due to bootstrapping the AC noise current of the 5532 becomes significant. With R3' in the megohm range at AC, Inoise * R3' makes for an interesting 1/f demonstration. The sonic character of the noise floor is rocky to say the least. When R3 is in the low range the circuit is very quiet. The answer of course is to use BIFETS with low current noise. Other than cheap stomp boxes using 4558s you almost always see TL074s in the all-pass. This may be why and my first circuit used a TL074 all-pass. I think the voltage followers that buffer the VCA input also need to be BIFET since they "touch" R3.

So R3 may look to be 10K but it's not due to the magic of bootstrapping.
https://ka-electronics.com

mediatechnology wrote:John: I found another cite for an SSM2164-based phaser and it looks like the Cfb around the I-V converter were made bigger so that it acts more like a voltage variable integrator: http://userdisk.webry.biglobe.ne.jp/000 ... ph0505.GIF

The gain cell is the variable R in a MFB LPF... below cut off in the passband the 10k R feeds the output, and the signal gets LPF the output is controlled by the dry 20K and signal roates through 180' of phase shift.


From looking at the all-pass network, doesn't it look like an SSM2164 paired with an I-V is inverting overall? Notice how the VCA output is summed back in through the inverting input.

I think the 30K feedback from the VCA out back into the SSM2164 input current node is a trick they don't show in the datasheet to alter the gain response. If you look at the voltage-controlled panner figure in the original SSM2018 datasheet you'll see something like this. http://www.analog.com/static/imported-f ... df#page=12


Looks like basic 2 pole LPF topology to me, while the r in series with one of the caps is not typical and adds a zero to that one pole.

JR
It's nice to be nice.
Top
Post Reply
26 posts