The medical industry has pivoted from helping humanity to exterminating it.

Relax in southern comfort on the east bank of the Mississippi. You're just around the corner from Beale Street and Sun Records. Watch the ducks, throw back a few and tell us what's on your mind.
Post Reply
1300 posts

Today's lesson is that cable ties are not robust enough for long term outdoor use.

They don't last long at all in Texas and become very brittle very fast.
https://ka-electronics.com

Today's lesson is that cable ties are not robust enough for long term outdoor use.

They don't last long at all in Texas and become very brittle very fast.

I actually have some metal cable ties that purchased for a high temp auto repair.

I am reminded about what I was thinking the last time I was lacking smart automatic sump pump control. If I plug my sump into a power meter, it draws a solid 300W when pumping water, and drops down to 250W or less when pulling air and water... I would like to see an even sharper current difference but suspect the pump motor will not overheat while pulling air and water, and will drop even lower current after that partial water runs dry.

In fact I think I bought a current transformer to sense current draw before I lost interest last year.

BUT I don't need yet another project.

My combo VCR/DVD player is no longer a combo... only plays VCR now.

and... one of my battery powered remote thermometer displays just spontaneously changed itself to Centigrade instead of Fahrenheit.

I like fixing stuff but that DVD player may just get discarded.

[edit- and, this morning my neighbor also woke up to no internet and no phone service, another lightning casualty. /edit]
[edit2- I found out that my other neighbor also lost his internet/phone.... he also lost his TV (satellite?)./edit2]
Last edited by JR. on Sun Apr 11, 2021 2:36 pm, edited 3 times in total.
Cancel the "cancel culture", do not support mob hatred.
Top

I just used the last two iron on patches to repair my pants of many colors.

There is now one more color, a very dark blue bridging across the red to the light blue patch on the outside, and a another vertical patch on the inside. I have low expectations for the longevity of this particular pair of jeans.

After this attempt they go into the trash bin, next time they tear...

[edit- OK for now but I can already see where the next three tears are going to be.... /edit]
Cancel the "cancel culture", do not support mob hatred.
Top

I figured out why the lightning was so loud.... It hit one of my tall pine trees less than 50' from where I was sleeping...

Now I'm going to have to pay a tree service to top that puppy and take it down safely...

This is a pretty serious piece of wood... 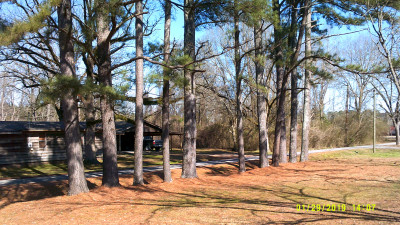 Well the sump pump level controller replacement is being shipped.... Last time they had me return the faulty one... Since this sucker only cost $35 originally and this will be the second repair, there is no way they made a profit from me. I feel bad about that because when it works it works, it was working fine for a year. We'll see how long it lasts this time.

Both my neighbors are still without internet/land lines.

My combo DVD/VHS player was still only working on video tapes but I decided to try the standard "line cord" reset..... That was easy... The DVD player is now working again after being unplugged and plugged back in.

I've seen this before from really short power interruptions where microprocessor controlled appliances get stupid and need to be reset. As I recall after the lightning strike my slow cooker in the kitchen got stupid...

Congratulation, you qualify as network administrator. That is how they fix server troubles.
Top

Congratulation, you qualify as network administrator. That is how they fix server troubles.

yup... reinitialize the boot up routine. This is a bad characteristic of "always on" gear.... except for my sump pump controller that failed always on.

Today I say the ATT service guy working on the lines near my lightning hit and not only are my two immediate neighbors without internet, but the local police station about 100 yards away has been down....

Seems like I was a little lucky... but lightning can be funny that way.

Re: Entropy that wasn't as easy as it should be...

My replacement sump pump float switch arrived and it works correctly... BUT now the sump pump itself is misbehaving... Testing it in a bucket of water doesn't reliably start pumping water. The motor is running but no water flow until it catches, then once it is pumping it empties the bucket faster than I can fill it with the water hose. Its as if it is cavitation or vapor locked.

I decided to take the sump pump apart and it uses screwball "Y" screws... apparently these are nintendo game screws? Not sure what they are doing on my sump pump?

The new 1/4 HP pump is an old school design so perhaps more reliable and doesn't have a float switch dongle for me to disable to use with the external controller.

The failure to not self prime in my old 1/2 hp pump is most likely related to a blocked internal passage but the coincidence of failing around the same time as the lightning strike is compelling.

PS: The external controller company don't want their broken unit back so I may take it apart just to see the innards.

[update- I took it apart and it's really simple... a couple transistors and a relay with a 555 timer to generate the 10 seconds turn off delay after water level drops below threshold. Made in China so probably not worth even them trying to fix it.

I just looked closely at the pump that won't prime and there might be a hairline crack in the housing. Unclear if it was there before. /update]
Last edited by JR. on Tue Apr 20, 2021 4:35 pm, edited 1 time in total.
Cancel the "cancel culture", do not support mob hatred.
Top
Post Reply
1300 posts