Where we discuss new analog design ideas for Pro Audio and modern spins on vintage ones.
Post Reply
60 posts

The rest of my rig showed up so tonight I can wire it all up and try to get all 6 channels happening.

This fun stuff. I went into a speakers black hole a few years back, finally got some 3 way Infinity and 2 way Advents re-surounded and recapped the crossovers, they sound really good now. Even before the surrounds went, they weren't sounding so hot. I need to work on some amps and reorganize the rig, that's up next.
Best,

Took a little trial and error but got 6 channels happening last night.

Looked at movies in cue on my DVR and more than half of them are 1930s-1950s so not much surround or sub happening.

Best of my unwatched short list for sound effects was "snow white and the huntsman"... Looking at the meters on my puny amps, lots going on in the surround channels and more sub activity than other movies so far. One Steve Segal movie was disappointing for sub output.

The decoder puts the mono dialog channel and sub channel on the same stereo output cable so for now the sub output is just tickling the meter to keep the dialog channel at a reasonable level.

Since I was selling surround systems (my delay based kit) back in the '80s it is impressive how much surround has been refined. Dialog shows up as full center with L/R front -3dB to -6dB (guess based on meters). Pure surround is almost all in rear channels with just a little in L/R.

It probably shouldn't be a surprise but late night talk shows put the audience sound completely in rear surround channels. I expect sports like baseball games will do a similar mix routing.

I wasn't brave enough to put my 50+ year old AR4X in the dialog channel since it is doing the most work, but I do need to see if it still plays. For now I am using a few of my small computer speakers for the two surround channels and center dialog.

I worry that this may reduce my enjoyment from watching old mono movies. In my old surround sound kit I had a stereo synthesizer mode where L+R+delay fed one side, and L+R-delay fed the other side. The delay caused a comb filter with different notch locations for a sensation of stereo... Maybe we need a modern version of that.

The (very cheap) surround decoder has a weird start up ritual. If I turn it on from the power strip it locks up in some mode with all input lights on and no sound. The selector switches are unresponsive. The only way it works is if I unplug and replug the power jack at the decoder (perhaps a start-up processor boot up quirk). For now I will just leave it plugged in 24x7 and switch the three power amps with the power strip. Before I got the decoder working I had some momentary distress, "how do I troubleshoot and optical input???" Luckily for me the old school unplug it and power it up again worked.

I'll be dialing this in for a while but already night and day better than before... continuous improvement.

PS: I am leaning toward using my two 6" 2-ways in series for the center channel. Running them at 16 ohms should improve the sub balance and they are my best sounding vocal range speakers. The 8" 3-ways could be L and R front speakers, and I'll use small computer speakers for the rear surround speakers. (I have 8" surround replacement kits on order because the 8" surrounds are going fast).

PSS: Funny how "surround" has two different meanings based on context here.
It's nice to be nice.
Top

Interesting how many even relatively modern movies have zero surround information. Even my old delay based unit always put something in the surround channels.

If i was making a modern decoder I'd add a fake mode.

It's nice to be nice.
Top

My only shortfall was a decent center channel "dialog" speaker. I tried my one old AR4x left over from the 60s, but it just makes distortion. For chuckles I decided to try my drum tuner that has two 4" full range drivers. 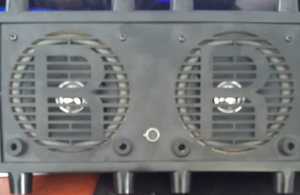 To my very pleasant surprise it sounds great.

The dialog doesn't need to go very low so these were perfectly adequate with no crossover in the middle of the vocal region to muck things up.

The surround sound on some program material sounds great. I am tempted to hoke up a fake surround for some old mono movies.

I almost watched a new movie last night for the better sound production values but half-way though the movie I bailed to watch an older movie I liked better despite the sound.

I am still very happy with my oddball DIY dialog speaker so this feels like fixing something that isn't broken but I just ordered a 8" full range coaxial driver to drop in my orphan AR4x cabinet.

I estimate this coax at $30 will be cheaper than fixing the AR4x... at a minimum I need to replace the woofer surround, the crossover cap is 40+ years old. There is a L-pad in the tweeter that is often problematic, and how lucky do you feel about a 40 YO paper tweeter? The speaker sounds distorted so either the crossover or tweeter/Lpad is causing that but i tried turning the Lpad and the sound didn't change.

They claim 59Hz cut off in a sealed cabinet with that new coax so shouldn't suck for a dialog channel with a neodymium tweeter so plenty of sizzle too.

Got the last speaker sorted. Put a new 8" coax driver into a near 50 year old AR4x cabinet.

Put the speaker grills back on..

Ready to watch some movies... to bad the old stuff I like is mono...

I may need to paint that AR4x black, but that seems wrong somehow.

Funny how a couple years can improve prices... My previous $700 parts/components estimate for 6 channels is now more like $200 (I just placed my order). The new modules have PS built in and deliver improved price performance.

with shipping and conversion to dollars closer to $200 but I am looking forward to checking out a Bruno Putzey design in person.

I still need to upgrade my front end digital processor, the cheap POS gets confused sometimes and I have to reboot it.

Funny, I was just looking at those. I need some speakers on the test bench. I have small wall mount capable ADC speakers I got over 25 years ago. They are a bit tired but should be okay for now. That UcD32 is just the ticket. I want to get a pair of KEF E301 Eggs eventually. Our phantom member Ricardo reccomended those a few years back. They sound fantastic for the size. There is a sale of them now for $200 a pair. I’m not ready to pull the trigger on anything yet.
Top

There is some rumor of a new improved model but I was pleased with the old Hypex, so this looks betta.

JR
[edit
My credit card company blocked the transaction as looking suspicious, I guess that is a good thing... I resubmitted my payment this morning.
--------
I will resist the temptation to design a fancy front end... I could use DPOTs to make a master volume control for all 6 channels